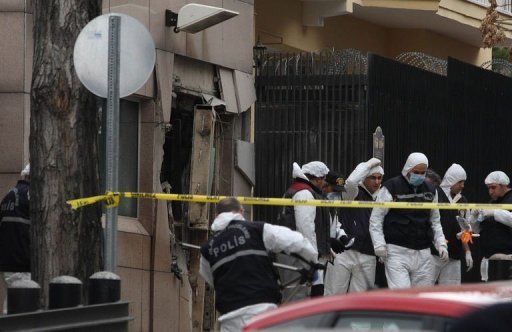 Ankara – A Turkish security guard was killed and several other people wounded in a suicide bombing outside the highly-fortified US embassy in Ankara on Friday, officials said.

The force of the blast damaged nearby buildings in the upmarket Cankaya neighbourhood where many other state institutions and embassies are also located.

“There were two dead in the suicide bombing, a Turkish security guard and the bomber himself,” Ankara governor Alaattin Yuksel told reporters, adding that a woman was also among the wounded.

There was no immediate claim of responsibility.

The US ambassador to Turkey, Francis Ricciardone, confirmed the death.

“We are very sad of course, we lost one of our Turkish guards at the gate… The compound is secure, we all feel very safe thanks to your response,” he told reporters.

NTV television reported that a suicide attacker detonated a bomb at the security roadblock near the entrance to the embassy’s visa section, where dozens of people wait every day.

“At approximately 13:15 (1115 GMT) on February 1, there was an explosion at the US embassy. Appropriate measures have been taken by the Turkish National Police who are now investigating the incident,” the US embassy said in a statement.

“The US embassy would like to thank the Turkish government, the media, and members of the public for their expressions of solidarity and outrage over the incident.”

Police have cordoned off the area, and ambulances were seen on standby amid fears the number of casualties could rise.

Television footage showed an injured women with a blood-stained face carried into an ambulance on a stretcher.

Predominantly Muslim Turkey is a close US ally and a member of the North Atlantic Treaty Organisation.

The blast comes barely a week after NATO declared that a battery of US-made Patriot missiles went operational on Turkey’s border with war-torn Syria on Saturday.

In July 2008, three gunmen and three Turkish policemen were killed in an attack outside the US consulate in Istanbul.

The bombings were claimed by an Al-Qaeda cell.

Friday’s attack also comes as the Turkish government is negotiating with leaders of the outlawed Kurdistan Workers’ Party (PKK) to resolve the three-decade Kurdish conflict.

The insurgency by Kurdish rebels seeking autonomy in the southeast has claimed 45,000 lives, most of them Kurdish.

The PKK, which is regarded as a terrorist group by Turkey and its Western allies, has carried out numerous attacks during the conflict, usually targeting Turkish security forces.