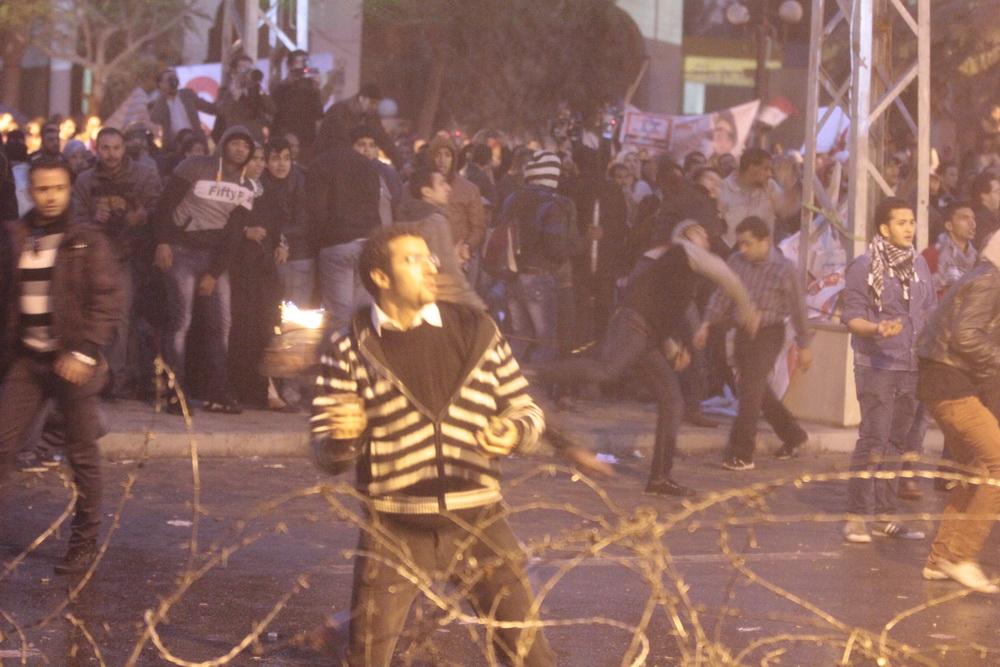 The violent clashes that took place on Friday near the presidential palace provoked varying reactions by political parties and the presidency.

Essam El-Hadad, President Mohamed Mory’s assistant for foreign relations, released a statement on Saturday, describing the violent events that took place around the presidential palace and in Egypt’s different governorates as “criminal acts” rather than political stances.

El-Hadad claimed police handled the events with discipline, adding that the Ministry of Interior is currently investigating the incident of the protester who was dragged, beaten and stripped by security forces in front of the palace during Friday’s protests.

The presidential assistant added that Egypt would be moving towards democracy through the parliamentary elections, scheduled to take place in about two months.

The party head called on all political forces to refrain from justifying violence, demanding the Ministry of Interior announce the results of investigations into the beating of the stripped protester quickly.

Al-Katatni also praised Minister of Interior Mohamed Ibrahim, for his quick response to the incident as ordered investigating it.

Reacting to the clashes, National Salvation Front (NSF) issued a statement on Friday, denying any involvement to the day’s violent incidents.

“Marches that moved from Al-Nour and Rabaa’ El-Adaweya mosques towards Itihadiya palace after Friday prayers were peaceful, and its protesters did not conduct any violent acts despite being few steps away from the main gate of the palace,” the statement said.

The statement affirmed the NSF’s demands of forming new government, sacking the current prosecutor general, amending the constitution and referring the Muslim Brotherhood to law as a legally founded organisation.

Al-Watan Party issued a statement on Saturday, denouncing the violent incidents and the forces behind it. The statement called on the government to declare the instigators of the incidents, asserting that they should maintain maximum discipline to prevent more bloodshed.

The 6th of April movement posted a statement on its Facebook page the same day, holding Morsy responsible for the current events, claiming the current situation resulted from Egyptians’ disappointment and loss of hope.

On Friday, the presidency issued a statement condemning violent acts of some protesters who threw Molotov cocktails and allegedly tried to enter the presidential palace.

“The presidency holds political groups that contributed in instigating violence responsible for the events, and calls all national forces to condemn violence and call its supporters to leave the vicinity of the palace immediately,” the statement said.

One protester, Mohamed Qorany, died while 91 others were injured during Friday’s clashes.