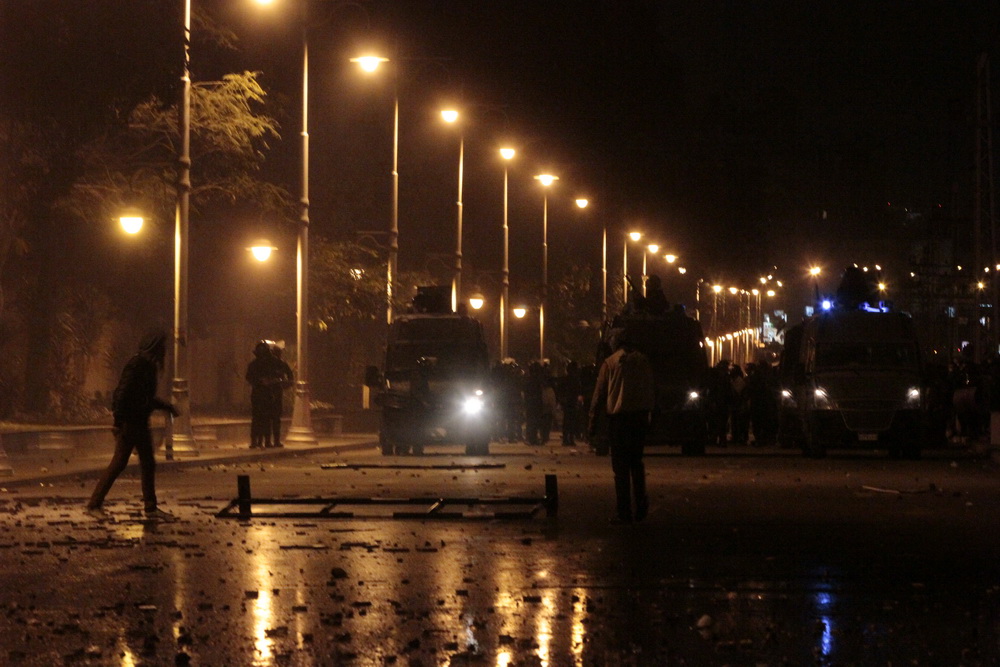 Update: Injured number increased to be 102, of which 88 in Cairo according to MENA.

One protester was killed on Friday amid clashes which erupted between the police and demonstrators outside the presidential palace.

The Ministry of Health stated that the protester, Mohamed Qorany, was shot in the chest, reported state-owned Al-Ahram. A silent funeral organised by his family was held on Saturday following an autopsy.

A total of 91 injuries were reported by the Ministry of Health on Friday; 82 were in Cairo alone, reported Al-Ahram. At least 62 of those injuries were sustained during the presidential palace clashes. In Tahrir Square, 20 protesters were injured.

The Ministry of Interior released a statement on Friday denying the use of birdshot against protesters on Qasr Al-Nil Bridge.

Eight protesters were injured in clashes which erupted in Kafr Al-Sheikh, adding to a string of injuries in the governorate, while only one injury was reported in Port Said.

Mohamed Hamed, a protester who was injured during last week’s protests, succumbed to his injuries and died in Suez General Hospital on Friday.

One protester, Mohamed Al-Gindy, disappeared from Qasr Al-Nil Bridge on Monday. He was found Thursday at Al-Helal Hospital, having sustained brain damage after being severely beaten and tortured. Al-Gindy was a Popular Current and Al-Dostour Party member in Tanta, Gharbeya.

Clashes with security forces have been ongoing now for a week since the 25 January Revolution’s second anniversary. At least 50 were killed throughout Egypt as a result of violent clashes.