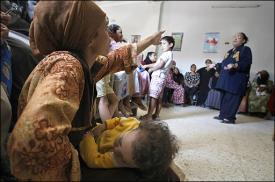 The Supreme Constitutional Court (SCC) turned down on Sunday a lawsuit which called for the law which criminalises female genital mutilation (FGM) to be scrapped.

Islamist lawyers Hamed Seddik and Youssef Al-Badry had filed a lawsuit to the Administrative Court in 2008 demanding the cancellation of Law 242 of the Penal Code, which criminalises FGM. Seddik and Al-Badry stated that the law breaches the 1971 constitution, which was valid back then.

The administrative court referred the suit to the SCC in 2008.

Head of the Medical Syndicate Hamdy Al-Sayed and Director of the Egyptian Centre for Economic and Social Rights (ECESR) Khaled Ali had intervened in the suit, calling for its dismissal.

“This is a victory for women’s rights, as well as social rights,” said Mohamed Adel, media coordinator at the ECESR. “There are more victories to come in the future.”

Adel stated the verdict mentioned that FGM has nothing to do with Islamic teachings, refuting claims by several Islamists.

The former minister of health issued Decision No 271 in 2007 criminalising FGM. Any doctors or nurses working in government or private hospitals or elsewhere, are prohibited from making any cuts to any part of the female reproductive system.

Law 242 states that committing FGM is a crime punishable by imprisonment from three months to two years, or a fine of at least EGP 5,000.