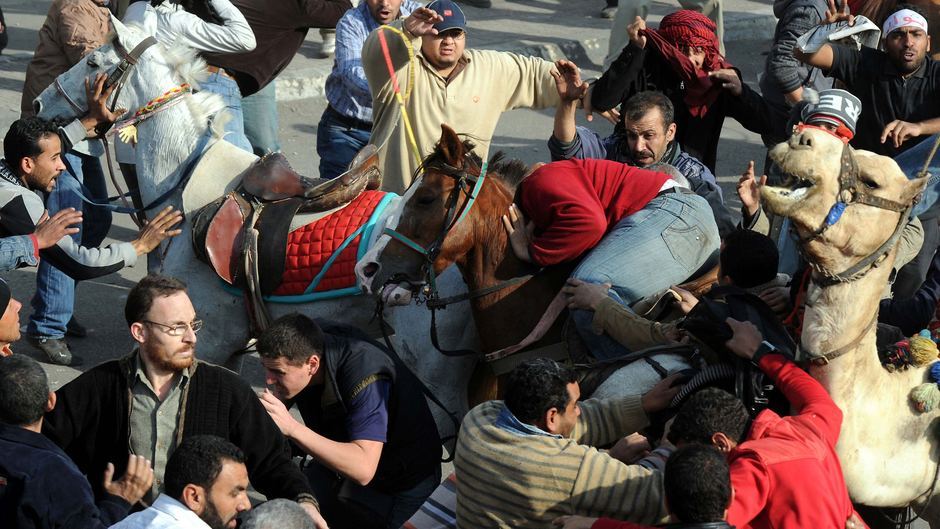 Prelude to the battle

Frustration with high prices, police brutality, and the domination of a single party over political life all contributed to Egyptians’ decisions to revolt in January 2011.

Between 25 January and 11 February 2011, the Mubarak regime fought hard to survive. The ousted president addressed the nation three times in less than three weeks in an attempt to control popular rage. Many believe he would have succeeded if it were not for the Battle of the Camel.

The deadly violence in Tahrir Square on 2 and 3 February, 2011 which came to be known as the Battle of the Camel is still surreal. The “battle” was preceded by Mubarak’s second speech of the 2011 Revolution.

In his first speech on 28 January 2011, Mubarak announced that he asked the Ahmed Nazif-led government to step down. He promised to take steps to support the low-income classes, raise the standards of living, and fight unemployment.

Mubarak replaced Nazif with Ahemd Shafiq, who was Minister of Civil Aviation at the time.  He also appointed former chief of intelligence Omar Suleiman as his Vice President. Suleiman was the first Egyptian Vice President in thirty years.

The changes in the administration failed to end the protest movement.

A few days after the first speech, Mubarak made his second address to the nation on 1 February, 2011. The emotional speech he gave persuaded many to sympathize with him.

“The thing that pains our hearts the most is the fear that has taken over the sweeping majority of Egyptians…. the events force us to choose between chaos and stability,” he said.

This was at a time when the police presence in the street was almost non-existent. Young men would take makeshift batons and whatever weapons they owned to the streets at night to guard their neighbourhoods, assisted by the army.

“I have tasked the vice president with holding dialogue with all political groups over all of the issues at hand for political and democratic reform,” he said. He said that the legislative and constitutional amendments required for reform would be made.

“I have never been a seeker of power or prestige… And I say with all honesty that I did not intend to run for another presidential term,” he said. He called on both the upper and lower houses of parliament to discuss amendments to Articles 76 and 77 of the constitution which govern the conditions a candidate must meet to run as president and the number of terms.

The presidential elections were set to be held in September, 2011. After the speech, many wondered whether it would be better to wait. Even those who did not think the concessions were enough were touched by his final words in the speech: “This dear nation is my country… I have lived in it, fought for it and defended its land, sovereignty and interests, and in it I will die.”

Following the speech, Egyptians were split between those who sympathised with the president and those who felt that the protests had secured many gains and it was time to back down and elect a new president in September.

Few wanted the protesters to remain in the squares after Mubarak’s speech. But no one was expecting the scene that evolved during the day on Wednesday, 2 February.

A crowded Tahrir Square was raided by a few dozen men riding horses and camels carrying pictures of Mubarak. Thousands of pro-Mubarak protesters also gathered outside Mostafa Mahmoud Mosque in the Al-Mohandessin suburb of Giza.

The men on horses and camels entered Tahrir Square from the Abdel-Moneim Riyad entrance, past the Egyptian Museum. The attackers suddenly charged and started attacking the crowds as protesters hurried to get out of harm’s way. However, not all protesters ran away from the attackers.

One of the protesters can be seen on video footage of the attack running after a man on a horse and tackling him to the floor. Once an attacker was caught, they were surrounded by infuriated protesters who beat them before other protesters rescued them. Eventually, all of the attackers were either capture or chased out of the square.

Doctors started treating the injured and a makeshift hospital inside a mosque near the square was set up.

Mubarak supporters and protesters exchanged a barrage of rocks. Molotov cocktails were also used against protesters. In the late hours of Wednesday and early hours of Thursday, 3 January, a more brutal and deadly attack on protesters took place. They were attacked with live ammunition from above the 6 October Bridge overlooking the square.

At least 11 protesters were killed and over 1,000 injured.

The sight of men on horses and camels wielding sticks and swords and attacking unarmed protesters did not achieve what the battle’s orchestrators were hoping for. Instead of scaring the protesters away, it drove them to flock to the square and participate in the camp-out.

The people behind the Battle of the Camel were never brought to justice. Around 25 defendants were put on trial for their involvement in the deadly attacks. The defendants included Fathy Sorour, the former speaker of the People’s Assembly and Safwat Al-Sherif, the former Speaker of the Shura Council, and a number of figures from the now defunct national Democratic Party.

In October, 2012, all defendants were acquitted.