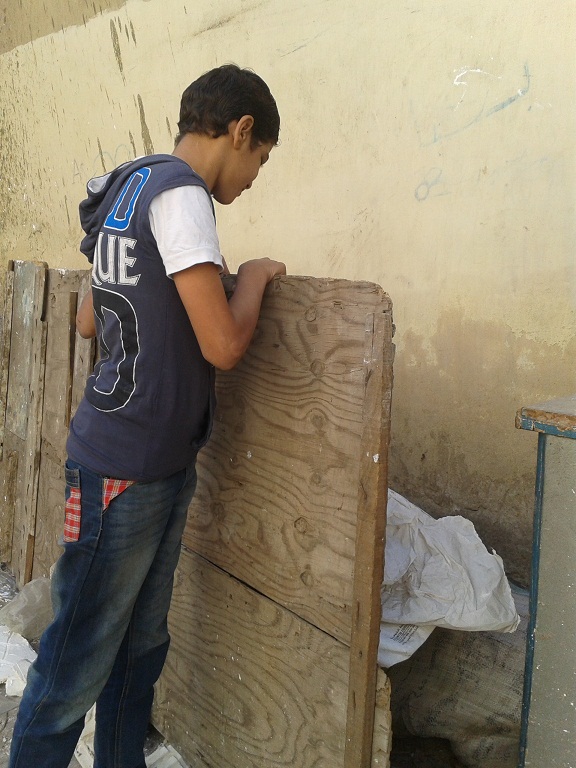 In its latest report, the Egyptian Coalition for Child’s Rights (ECCR) stated that in recent clashes following the second anniversary of the January 25 revolution, 91 children under 18 years of age were detained by Cairo police in inhumane conditions.

The statement denounced the use of children in clashes, and the state and society’s failure to offer them basic rights of protection.

“The worst part is that some of the children were kept in Central Security Forces camps at Tora and Madinet As-Salam,” Ahmed Meslhey, a lawyer at ECCR, told Daily News Egypt. “They were beaten with police batons and some had army shoeprints on their faces.”

Many children were interrogated by the police without the presence of a lawyer or adult relatives before they were released. “According to the law they should have been interrogated within 24 hours of their arrest, but all children were detained for four days before seeing a prosecutor,” added Meslhey.

The statement also explained that the children were interrogated by a general prosecution and not a child’s prosecution which violates the rights laid out in article 122 of the Egyptian Child’s Law.

The children were accused of “assembling on the streets, obstructing public transportation, attacking state employees, use of force, thuggery, beating and resisting policemen” among other accusations. The statement also criticized the distribution of the children over five prosecutions in five different areas, making it difficult for lawyers to attend interrogations.

“They may not all be street children but they are all minors,” said Amira Mikhail of Mandeel Wara, an initiative mainly concerned with street children which coordinates with ECCR in such cases.

“Realistically we cannot prevent detention [of minors],” said Mikhail. “Some of the protesters are quite young, but what can be done is improving the treatment of [incarcerated] children; they are [currently] held in cells with adults and are subjected to torture and abuse by the police or potentially other inmates.”

Of the 91 children arrested, 15 remain imprisoned with a hearing scheduled for Wednesday 6 February.

Today, a petition was filed with the Prosecutor General Tallat Abdullah asking for the release of 14-year-old Mahmoud Adel who suffers from bone cancer and has missed a chemotherapy session as well as 13-year-old Abdel Rahman Ramdan, both arrested in Alexandria on 27 January. A judge refused to release both boys on February 2, extending their incarceration for 15 days.

The petition was filed by Ghada Shahbenderof the Egyptian Organization for Human Rights, the Egyptian Centre for Economic and Social Rights, and lawyers Ragia Omran and Malek Adly.

Adel’s arrest  has prompted a frenzy of action from human rights activists because of his medical condition and the extension of his incarceration.

The judge’s decision was “socially and politically biased,” said Shahbender, ” he did not show as much consideration as he did for individuals of higher socioeconomic background and ignored our appeal and lack of evidence against the children because of the nature of the case [which is] demonstrations against the regime.”
Topics: alexandria cairo Clashes Egypt human rights