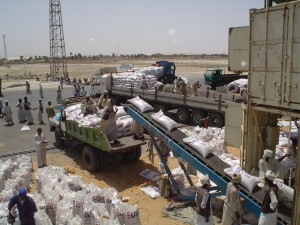 Hatim Abd al-Latif, Egypt’s minister of transportation, said that a land port currently being constructed near the town of Qastal on the Egyptian-Sudanese border will be completed by January 2014.

He added that those living in the Aswan province, and specifically the city of Abu Simbel, would be given priority to work at the port.

The announcement came after Abd al-Latif and Mustafa Al-Sayyid, governor of Aswan, surveyed the port, which is being built on 60,000 square metres of land, and at a cost of roughly EGP 47m. Construction on the port began in June 2012.

Abd al-Latif predicted that the port will help increase travel, investment and commercial exchange between Egypt and Sudan, in addition to helping establish a free market for the trade of livestock and other merchandise on both banks of the Nile Valley. The port will also include a number of administrative buildings and facilities, responsible for overseeing issues related to customs, traffic, quarantine, the issuance of passports, veterinary services and the monitoring of imports and exports.

These facilities will be equipped with the most modern forms of technology to engage in searches and seizures, in addition to three electricity generators operating at 500 kilowatts. The port will also include wide areas of land which will be used to regulate the movement and flow of cars and heavy vehicles, in addition to a 280 metre-long, six metre-wide dirt road  set aside specifically for camel traffic.