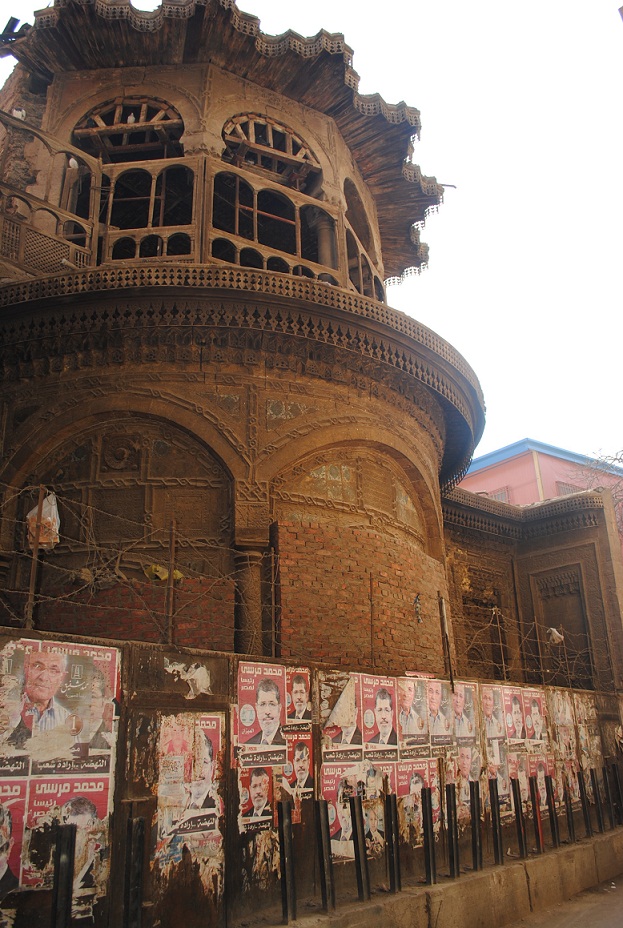 Cairo is the home of numerous ancient wonders that preserve the tales and stories of times long past. The capital was the biggest of all cities and the destination for many travelers and chroniclers during the medieval period.

Cairo’s monuments do not get an equal dose of concern and attention, as the Citadel and Al-Hussein district have always garnered most of the preservation efforts. Many other monuments have been suffering from negligence and disregard, and the old weaponry market is a prime example of this.

Behind the two pearls of ancient Islamic architecture, the Sultan Hassan and Al-Refaie mosques, you find the armory market or Souq El-Selah, which is believed to be the main source of arms in Cairo during the medieval era.

The arm’s market is teeming with many fabulous Islamic monuments like the Manjac’s gate built by Prince Seif El-Din Mengak El-Selehdar in 1347 with swords and shields carved on its front. The huge Prince El-Gayy mosque is located at the beginning of the area, and Sultan Hassan’s personal steward is believed to be buried there.

Another old treasure is Prince Bashtak’s public bathhouse, built in 1341 and where brides were scrubbed and adorned before their wedding ceremony. There are many more significant sites, but Agha Koklyan’s water source and Al-Merdany mosque are both considered the treasures of the arms market because of their exceptional ornamentation which is unfortunately suffering from severe negligence and is in disrepair.

The unconventional beauty and the historic significance of the market make it easy for visitors to imagine what it was like 700 years ago during its golden days in the Mamluk era. The old streets echo with the hustle and bustle of buyers and sellers, the clatters of arms craftsmen and blacksmiths making swords, spears, shields and rifles in all conceivable forms, a prince and his guards in colourful uniforms standing in front of a workshop negotiating business deals and the Mamluk prince Ezz El-Din Bahader, who lived in the district and pledged to the king that he would take care of the market, riding his stallion proudly up and down the streets with his squad monitoring sales and general activity.

The historic significance of the armory venue has sadly faded through ages and nearly all arms workshops have changed their activity since the 1952 coup d’état. Many buildings were destroyed and rebuilt as more modern buildings. However, some aspects of the old times still remain; like the calls to prayer from ancient mosques and the families that have inhabited the area for generations.

Eglal Helmy, an older lady who has lived in the area since her childhood, pays a daily visit to El-Merdany mosque where she leaves some food and water for the pigeons. She stays there until the noon prayer and then leaves for the Al-Azraq mosque where she stays till the afternoon prayer, after which she finally goes home. “The market area needs renovations; there are many mosques and monuments here that are not less important than El-Hussein mosque or Khan El-Khalili,” she said.

The market is 220 metres long and connects the Citadel with the old Al-Ghouriya districts. Although several attempts have been undertaken by the government to renovate and restore the market, it still needs a lot of additional attention before it can open for tourists and other visitors.