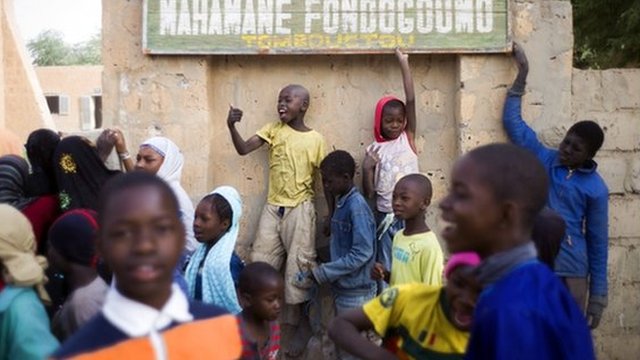 Gao, Mali (AFP) – Schools reopened Monday in Gao in northern Mali after French and Malian troops moved in and armed Islamists who had held the town for seven months fled, an AFP photographer said.

Girls and boys of all ages made their way to public and private schools in Gao, the largest town in northern Mali which was deserted under Jihadist rule by many of its 70,000 residents.

At the primary school in the eastern Aljanabandia district, “about 600 pupils” out of a normal attendance of more than 1,100 children turned up for school, its headmaster Abdou Cisse told AFP.

Classes stopped after the Islamists launched an offensive against southern Mali on 10 January after occupying the north, prompting rapid French intervention alongside Mali’s troops. Gao was taken back from the armed Islamists on 26 January.

The primary school was short on equipment Monday. For the lack of available classroom space, some pupils were receiving their lessons on the bare concrete floor. Cisse said that the armed groups had taken away the desks for firewood.

The boys and girls were grouped separately in each classroom, just as they had been told to do by the Islamists, who imposed their strict interpretation of Muslim Shari’a law. However, the headmaster said that this situation would change in coming days.

Gao, 1,200 kilometres northeast of the capital Bamako, had since June 2012 been a stronghold of the Movement for Oneness and Jihad in West Africa (MUJAO), one of the Islamist groups that seized the northern half of Mali last year.