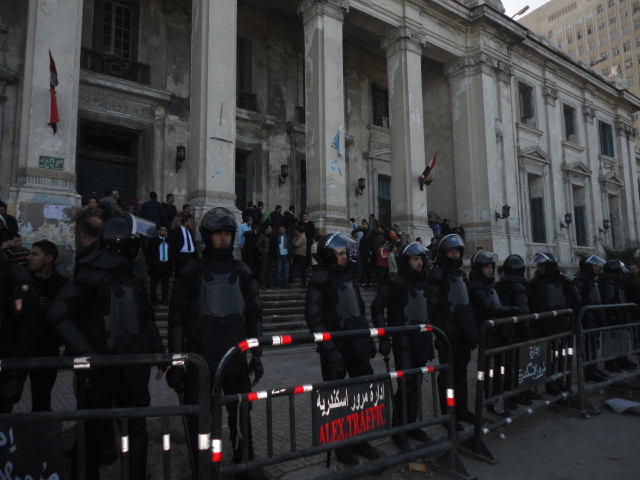 Activist groups and political parties have called a press conference in Alexandria on Tuesday evening to address human rights violations committed against detainees arrested since 20 January.

Released detainees, family members, and lawyers of those still in custody will be present to testify regarding human rights violations that took place while the detainees were in custody, said Haithem Elhariri of the Al-Dostour party.  These violations include: detaining minors, beating detainees, threatening to rape or otherwise physically harm them, and sexually harassing them, said Evronia Azer, a member of activist group No Military Trials.

Earlier on Tuesday, Azer estimated the total number of detainees remaining in custody to be as high as 55. However, around midday, several detainees were released, bringing the total number down to 35. Around 20 of these are under the age of 18, according to Mohammed Hafez, a human rights lawyer in Alexandria.

Among these is Mahmoud Adel Mohammed Hussein, a 14 year old boy with cancer who has been refused treatment. Hafez is serving as his lawyer and will represent him at the press conference. Hafez is also representing 14 year old Abdurahman Ramadan Mohammed.

“The charges against the detainees vary from case to case,” said Azer, “but they include blocking traffic, threatening the general security of the city, insulting the police, and violent behavior.”

Hafez maintains that the two boys are not guilty of any of these charges and hopes they will be brought to trial within 15 days.

The press conference is being hosted by the People’s Committee for the Defense of the Revolution. Several other activist organizations and political parties will be present, including members of the Kifaya movement, the Lazem movement, the Revolutionary Socialists, and the Al-Dostour party.