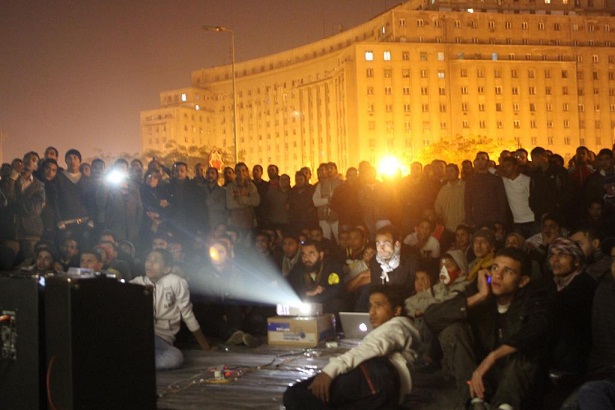 Taking citizen journalism to a new level, Mosireen has made a name for itself through its dedication to the Egyptian revolution, its commitment to empowering citizens through media, and its use of cinema as a means to subvert political systems.

Mosireen’s latest workshop takes place in the once-troubled city of Nag Hammadi, the site of Muslim-Christian clashes in the past, and aims to teach participants the basics of photography, editing, and uploading videos.

The idea behind Mosireen came from a group of filmmakers and activists who saw a need to create a space supporting independent media. When mainstream media began neglecting events on the street in March 2011, Mosireen says citizen journalism became the only breathing space. The media collective is concerned with “balancing the truth”.

“Mosireen believes in the power of the people’s media. There has to be an alternative to state-owned media and privately-owned media, both of whom serve the interests of a certain group. The best example of this is Al-Jazeera, who during the revolution, was broadcasting footage that was seen as helpful to the revolutionaries and a few months later completely changed its direction,” said Lobna Darwish of Mosireen.

The idea of fighting state media through creating a people’s media caught on immediately, and Mosireen has become a well-known name in activist circles. When the collective needed money a few months ago, it found no lack of support from well-known activists and twitter celebrities and was even featured on popular torrent-sharing website The Pirate Bay.

This workshop is part of the general direction that Mosireen is taking, spreading the idea of fighting the media through media, beyond the capital and into other governorates that have been notably left out of traditional media narratives,

“We have done other workshops in Upper Egypt and cities like Mansoura. We did not want to go for a city like Assiut or Minya because we felt that Nag Hammadi was not only more marginalised as a site of revolutionary activity, but also was the site of a famous incident,” Darwish said.

Supported by the Arab Digital Expression Foundation (ADEF), the workshop is organised in collaboration with Welad El-Balad journalism, an initiative specialising in local journalism, and focuses on teaching amateurs in Nag Hammadi the basics of citizen journalism.

Taught by filmmakers and industry insiders, Mosireen’s workshop will feature professionals who will volunteer to teach participants how to tell a story through editing and composition and how to upload and promote a video using the internet.

Mosireen said it is important for those who apply to make sure they are free for the entirety of the workshop, have an interest in learning cinematic skills, and are willing to contribute to the efforts of citizen journalism and media.

Because the workshop is free to attend and they have space for only a limited amount of participants Mosireen said applicants with some experience in citizen journalism or using simple cameras are preferred.

The submission deadline for this workshop is 9 February. The workshop will take place over the course of three days, from 12 to 15 February, and will run from 4pm to 9pm.