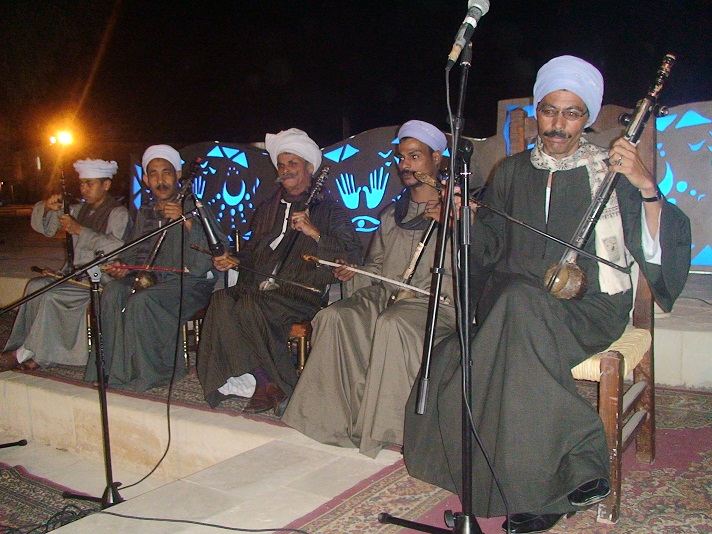 Al-Seera Al-Hiliaya or the epic tale of the Al-Hilaly tribe is an important part of Egyptian folklore and oral heritage. The tradition of storytelling may have vanished from the Egyptian urban areas, but it is still very popular in many rural areas, especially in Upper Egypt.

Al-Seera Al-Hiliaya tells the story of the Al-Hilaly Bedouin tribe, which emigrated from the Arabian peninsula to North Africa. The tales are preserved by chroniclers and storytellers whom roam the Egyptian villages, singing rhyming verses as entertainment accompanied by on an Egyptian folkloric musical instrument called Al-Rababa, which is a two stringed lyre made of wood.

The seera is divided into three stages: the first stage is called the birth, which narrates the birth story of the tale’s protagonists, Abu-Zeid, Diab, Al-Zanaty Khalifa and King Hassan; the second stage, the leadership, tells the story of Abu-Zeid and his journey to Tunisia; and the last stage, the emigration, describes the emigration of the whole tribe to Tunisia and their ensuing battles with the Tunisian tribes.

According to the heroic tale, the tribe migrates looking for food and water, while many historical references link their migration to political disputes with the Abbasid dynasty who ruled the Arab world at that time. “Al-Seera Al-Hilaliya is a true story, but it is mingled with many stories made up by the storytellers to make it more interesting,” said Hisham Abdulaziz, researcher and the director of the Egyptian Folk Encyclopedia Project.

The descendants of the Al-Hilaly tribe are now scattered in many rural areas around Egypt, from the govenorate of Al-Sharkiya, east of Cairo, to Assiut, Suhag and Qena in Upper Egypt. There is plenty of drama and suspense in the story which helped the Egyptian storytellers to preserve it over the years.

Ezz El Din Nasr, Gaber Abu-Hussein and Sayed Hawas are considered the most famous storytellers in Egypt today and they inherited the profession from their fathers and grandfathers. Storytellers are invited to sing on many occasions in rural Egypt, like weddings, circumcisions and Islamic feasts.

The melodies and compositions vary from one story teller to another and also from region to another. “In Upper Egypt the tale sounds completely different than in Lower Egypt,” Abdulaziz said. The story reflects some of Egyptian characteristics like bravery, wisdom and prudence and people interact with the story and its protagonists in different ways. East-Nile region inhabitants are great fans of Abu-Zeid, whereas West-Nile dwellers adore Al-Zanaty Khalifa and “any storyteller must keep in mind the preferences of his listeners,” said Abdulaziz, adding that the type of audience might affect how the story ends.

The size of the tale is undefined; it consists of thousands of verses and its recordings can be 300 hours long. Abdulaziz said: “The media imposes certain singers and entertainers on us who are detested by the majority of Egyptians while recordings of a famous storyteller like Ezz El-Din Nasr may be double or even triple Amr Diab’s sales, but that fact is always neglected in the media.”

It is a fact that even if the Al-Hilaly tale receives little support from mainstream media, it is still thriving among the population and storytellers’ numbers are growing. As long as Egyptians love to listen to these folkloristic tales, the tradition will stay alive.