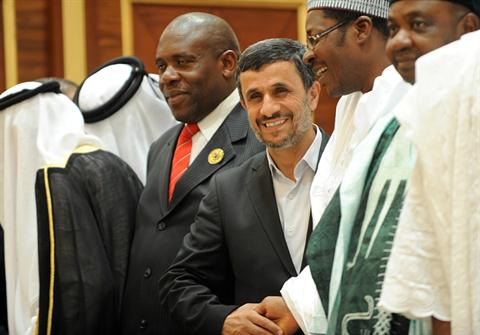 The 12th session of the Organization of the Islamic Conference summit kicked off on Wednesday attended by the leaders of more than 25 Islamic countries, including Iran’s Mahmoud Ahmadinejad.

The president of Senegal, Macky Sall, is scheduled to make the opening speech of the summit.

The conference will discuss developments in Syria, the Palestinian issue, and the conflict in Mali.

Egyptian Foreign Minister Mohamed Amr said there will be a closed session aiming to discuss the Palestinian case in the afternoon. He said that decisions concerning Palestine might emerge from this meeting.

Major attendees include Saudi Arabia, Turkey, and Iran. Syria is the only missing delegation so far. The country was suspended from the last OIC summit held last August.

The Moroccan Prime Minister and a small delegation from Jordan are present.

The Organization of the Islamic Conference brings together 56 Islamic states and aims to promote Muslim solidarity on political, social, and economic issues. In August, Saudi King Abdullah bin Abdulaziz Al-Saud called for an emergency meeting of the OIC, where Morsi announced a quarterly initiative to end the Syrian crisis.