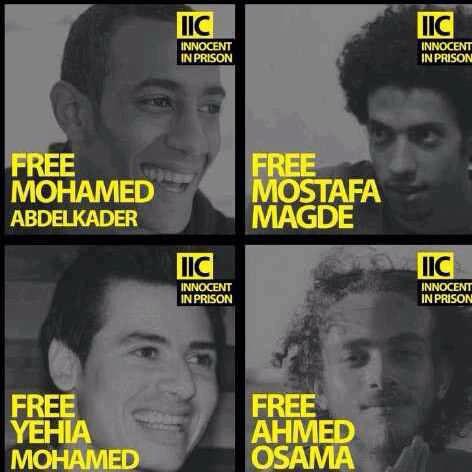 The five detainees were fined EGP 1,200 each at the Zeinhom Court and served a suspended sentence of two weeks in jail. Their lawyer Mahmoud Belal stated that they were accused of “thuggery, display of power, sabotaging public and private property, and attacking public authority personnel”.

“We shall appeal this verdict,” Belal said. He stated that the appeal could result in the dropping of the charges, as well as the fine. For the time being, he added, the detainees’ friends will pay the fines for their release.

The detainees were arrested last Thursday outside the South Cairo Court while rallying in solidarity with a group of protesters who were taken into custody on 28 January outside the Cairo Governorate Building. “Three of those arrested were friends of mine as well as Mody’s,” said Mahmoud Sameh, Mody’s friend who was with him when he got arrested.

Sameh claimed a group of “uncivilised” men and women bombarded the Thursday trial, one woman breaking the window of the court. The incident was closely followed by the exit of an unidentified lawyer from court, who shouted at the rally that the detainees “will not be released”. Soon, clashes erupted between security forces and those rallying outside the court, with shop owners siding with security. Sameh described the scene as a “trap” woven by court security.

“One shop owner told us after the clashes stopped that he was told by police that the protestors’ rally attempted to break the detainees free,” Sameh said, denying any truth in the police’s allegations. Sameh claimed Mody did not attack anybody or sabotage anything. “He was only trying to break up the fights,” Sameh said.

At the time of his arrest, Sameh stated that Mody was on the phone, standing in the midst of almost 400 security forces. “A friend of ours tried to warn him, but he was already arrested.”

Mody was arrested alongside Yehia Abu el Naga, Mostafa Magdy Mostafa, Ahmed Nebeeh, and Sa’eed Abul Einein. They were tried on Saturday and were detained for a further 15 days. Lawyers appealed the verdict, setting another trial on Wednesday.

Arrests have plagued the country since protests held on 25 January commemorating the second anniversary of the revolution. Human rights lawyers estimate that 1,000 people have been arrested across Egypt since then.