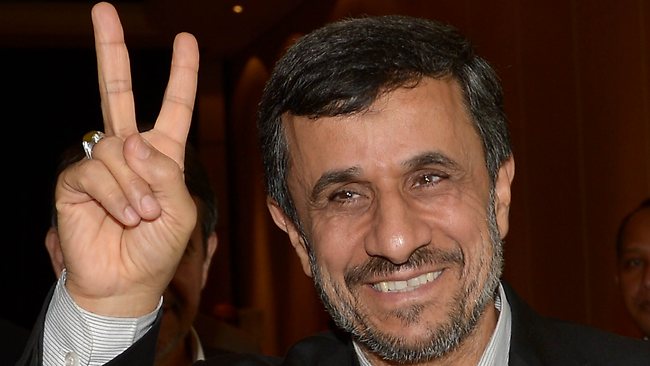 Egyptian Shi’a differ from their Iranian counterparts, Ahmadinejad’s visit is a sign of penetration, says Shi’a spokesperson in Egypt

Egypt’s political and religious groups reacted differently on the visit of the Iranian president Mahmoud Ahmadinejad to Egypt.

The Salafi Al-Nour Party issued a press release on Tuesday night, stating that Ahmadi Nejad’s visit to Egypt did not come on the right time. The statement claimed that Iran is supporting the massacres conducted on Sunni Muslims in Syria, Iraq and Lebanon, and is attempting to spread Shi’ism to Egypt and the Gulf states.

The statement mentioned that President Morsi’s meeting with Ahmadinejad should tackle the Egyptian rejection of Iranian policies, especially those dealing with Syria and the Gulf region. Al-Nour called on the Iranian officials to realise that the security of the Gulf region is crucial for Egyptian national security.

“The meeting should also assert that Egypt will not allow Shi’ism to spread in Egypt, which is the largest Sunni Muslim state in the region” added that statement.

Bahaa Anwar, spokesperson for the Shi’a in Egypt, said Egyptian Shi’a differ from their Iranian counterparts, explaining that Iran is willing to establish several religious states through spreading political Shi’ism to the Gulf region, Egypt and Syria. He added that Egyptian Shi’a are not calling for a religious state, adding that they reject the Iranian oppression of the Sunni minority in Iran and their support for terrorist groups across the region, according to Anwar.

“It was a meeting between two presidents who both take orders from their supreme guides.” Commented Anwar on Ahmadinejad’s meeting with Morsi.

The Shi’a spokesperson expressed his astonishment over Ahmadinejad’s visits to the Sayeda Zeinab and Al-Hussein mosques, where two of the Prophet Mohamed’s descendents are buried, claiming that it is unusual for any president visiting Egypt to include such visits in his programme.

The Shi’a are known for their veneration of and devotion towards the Ahl Al-Bayt, or the Prophet’s family, and therefore hold sites such as the Al-Hussein and Sayeda Zeinab mosques as especially holy.

Anwar further explained that Ahmadinejad’s visits were messages to the whole world that he had succeeded in penetrating the largest Sunni country in the region. “That’s why he made the victory sign from inside the Al-Azhar mosque,” he said.

Khaled Dawoud, spokesperson for the National Salvation Front (NSF), said that the NSF has no unified stance regarding Ahmadinejad’s visit.

Hany Kourshid, spokesperson for the Al-Dostour Party, also stated that his party did not decide on a certain stance regarding the Iranian president’s visit to Cairo.

The Freedom and Justice Party (FJP) could not be reached for comments on Ahmadinejad’s visit.

Reacting to Morsi’s meeting with Ahmadinejad, social media activists shared an old video of Morsi saying that the Iranian Charge d’Affaires in Egypt is trying to meet him, adding that he would accept such a meeting only if Iran stops supporting the Syrian regime. The video goes back to the time when Morsi was the head of Freedom and Justice Party (FJP).

Hassan El-Shafi’i, advisor to Ahmed el-Tayeb, the Grand Imam of Al-Azhar, the largest and most prestigious Sunni authority in the world, said that Tayeb discussed with Ahmadinejad the main difficulties facing the relations between Egypt and Iran, asserting that Al-Azhar would not tolerate any attempts to spread Shi’ism in Egypt.

Shafi’i explained that Tayeb received Ahmadinejad as the president of a neighbouring country, adding that Al-Azhar wants to improve the relationship between the two countries for the sake of their people.

Moreover, Tayeb called on Ahmadinejad to grant Sunni Muslims living in Iran their full rights as Iranian citizens, according to Shafi’i.

Ahmadinejad arrived to Egypt on Tuesday, to attend the 12th session of the Organisation of Islamic Cooperation (OIC) hosted in Cairo, and which began on Wednesday.

President Morsi received the Iranian president at the airport, before Ahmadinejad met with Tayeb Sheikh Ali Goma’a, the Grand Mufti of Egypt.

During his visit to the Al-Hussein and Sayeda Zeinab mosques, a group of people tried to attack Ahmadinejad, but security forces controlled the situation and arrested the attackers.