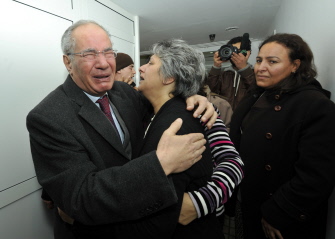 The murder prompted President Moncef Marzouki to cut short a foreign tour, one of his advisers Ghassen Dridi told AFP, as the presidency urged “restraint and wisdom”.

Prime Minister Hamadi Jebali denounced the murder as an “act of terrorism” while the presidency in a statement dubbed it an “odious” crime designed to “lead theTunisian people to violence.”

Protests erupted in several Tunisian towns and demonstrators torched one Ennahda party office and ransacked another, as Belaid’s brother accused the Islamist Ennahda party of being behind the assassination.

“This is a criminal act, an act of terrorism not only against Belaid but against the whole of Tunisia,” Jebali told private radio station Mosaique FM, while promising to do everything possible to swiftly arrest the murderer.

“The Tunisian people are not used to such things. This is a serious turn … our duty to all, as a government, as a people, is to be wise and not fall into the criminal trap which seeks to push the country into chaos.”

France condemned the murder, describing Belaid as a courageous fighter for human rights.

“This murder robs Tunisia of one of its most courageous and free voices,” President Francois Hollande said,.

The family of Belaid, who headed the opposition Democratic Patriots party and was a harsh critic of Tunisia’s Islamist-led government, was in no doubt as to who was behind the murder.

“My brother was assassinated. I am desperate and depressed,” said Abdelmajid Belaid.

The murder of Belaid comes at a time when Tunisia is witnessing a rise in violence fed by political and social discontent two years after the mass uprising that toppled Ben Ali.

Several opposition parties and trade unions have accused pro-Islamist groups of orchestrating clashes or attacks against them.

The killing fuelled anger across Tunisia.

Demonstrators torched Ennahda offices in Mezzouna near Sidi Bouzid and ransacked Gafsa in the centre of the country while protests rocked several cities, including Sidi Bouzeid, AFP reporters and witnesses said.

Sidi Bouzid was where the desperate act of a jobless young man who set himself alight in late 2010 triggered the Tunisia uprising.

Marzouki was in Strasbourg on Wednesday morning, where he took part in a session of the European parliament and met French President Francois Hollande, and was due to fly later to Cairo to attend a summit of the Organisation of Islamic Cooperation.