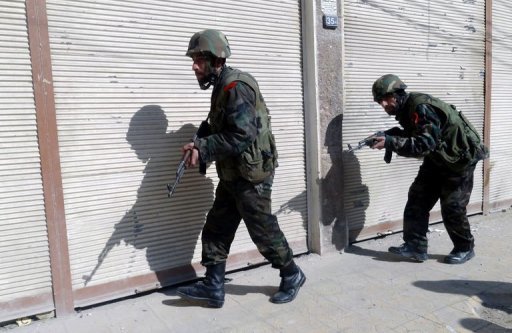 AFP – Rebel belts around Damascus were rocked by fighting and heavy shelling for a second straight day on Thursday as the army pressed a major offensive that a watchdog said killed 55 people in 24 hours.

Among those killed were five civilians, three of them women, who died when mortars slammed into the Yarmuk Palestinian refugee camp on the southern outskirts of the capital, the Syrian Observatory for Human Rights said.

The watchdog had on Wednesday reported the launch by President Bashar al-Assad’s forces of a fierce offensive on rebel belts on the outskirts of Damascus, while residents reported the heaviest bombardments in months.

The Observatory reported early Thursday that at least 19 civilians, 28 rebels and eight soldiers have been killed since the launch of the offensive, which is focused in the southern and eastern outskirts of the capital.

It said that rebels on Wednesday attacked a security checkpoint between the northeast Qaboon district and Abassid Square near the centre of the capital, sparking fierce fighting.

“The attack was to relieve the rebels in Daraya,” opposition activist Omar Shakir told AFP via Skype, referring to an embattled southwestern suburb of Damascus that has been under continuous army bombardment for months.

The Britain-based Observatory reported the arrival Thursday of new military reinforcements at Daraya, strategic for its location near the sprawling Al-Mazzeh military airbase and key to the army’s bid to drive opposition fighters from the capital.

The watchdog also reported shelling during the night on Jobar district in the east and Tadamun, Assali, Qadam and Al-Hajar al-Aswad in the south, as well as clashes in southern Damascus.

In the Yarmuk camp, five civilians including three women were killed when mortar rounds fired during fighting in nearby Tadamun district landed among the refugees.

The opposition network the Syrian Revolution General Council meanwhile reported regime raids in the southern district of Midan and the closure of all roads leading to Yarmuk.

Also on the outskirts of the capital, loyalist troops pounded rebel positions across the east and in the south, the Observatory said, as clashes broke out around a military vehicles depot between Harasta and Irbin to the northeast.

These areas of Damascus are among the strongest bastions of the rebellion against the regime of President Bashar al-Assad, which is battling to suppress a nearly two year revolt that has left over 60,000 dead according to the UN.

The Observatory, which gathers its reports from a large network of activists and medics in civilian and military hospitals on the ground, said that 141 people were killed nationwide on Wednesday: 36 civilians, 39 soldiers and 66 rebels.