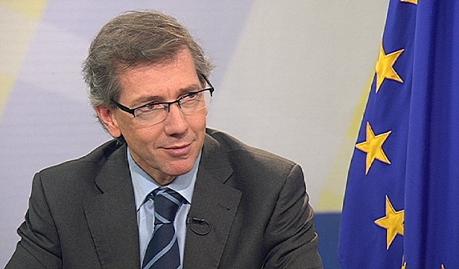 The European Union Special Representative to the Southern Mediterranean Region Bernardino León has concluded his brief visit to Egypt, and said that dialogue was the only way out of Egypt’s current crisis. In an interview with state-owned news agency MENA, Wednesday night, León denounced violence from all sides, saying demonstrations had to be kept peaceful, and that a thorough investigation, that is both impartial and effective, must be conducted to investigate the recent events.

León stressed that both the government and opposition groups must overcome their differences, and given Egypt’s long and proud history, they should be able to do so with confidence.

On the sidelines of the Organisation of Islamic Cooperation (OIC), Foreign Minister Mohamed Amr met with León, and according to MENA spoke about the aid promised by the EU to Egypt. León had told Amr that the EU would be providing the pledged €5bn in financial aid sometime this year or the next.

Financial assistance to Egypt is conditional on several aspects, including concluding a deal with the International Monetary Fund (IMF) and effecting substantive government reforms.

Under its ‘more for more’ scheme, the EU pledges to allow for financial assistance proportionate to the amount of EU-approved reforms carried out by the country in question in the areas of human rights, politics, economics and personal freedoms.

León told Amr that asset recovery, trade and investments were the highest priorities for EU-Egypt relations.

According to the interview with MENA, León said he felt the country was not back to square one regarding the revolution, but stressed that Egyptians needed to work together to overcome the current situation.

The EU has singled Egypt out as its priority trading partner, León said, adding that the recent spate of troubling events would not sour relations between the two. “The [European] Union can play a vital role in supporting the democratic transition in southern Mediterranean countries through the development of programmes and projects and through promoting developments that increase investments in specific sectors, generating new jobs,” said León.

Speaking on Syria, León conceded that a political solution would take some time, and stressed the importance of Arab and European efforts to find a solution to the crisis.

León was in Cairo to follow up on a meeting held last year between a European and an Egyptian delegation. The November meeting outlined the financial aid the EU was prepared to offer Egypt, and León’s visit is an affirmation by the EU that it is still willing to commit to Egypt if it meets their conditions.