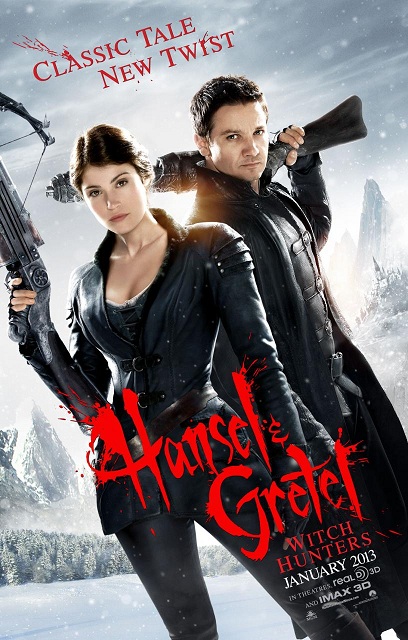 Hansel and Gretel did not stand a chance of retaining sanity after they were abandoned in the woods to starve by their parents. Being caught by a cannibalistic witch with bad eyesight was the icing on the cake; by then the damage was done and they kill the witch by pushing her into her own oven. That is the classic version.

If that version of the fairy tale was not enough to scar you for life, hurry to the cinema where Jeremy Renner and Gemma Arterton go head to gory head with Famke Janssen in Hansel and Gretel: Witch Hunters, described as trite and predictable by critics.

Slo-mo action scenes do nothing but spin out the non-existent story and the pretend tongue-in-cheek humour fizzles out before it hits its stride. If you like visual and sound effects, gore, and you do not care that you cannot relate to the on-screen heroes, this is the film for you. We recommend that everyone else stays at home.

After his starring role in the slightly painful Skins, Nicholas Hoult picks up a similar role, from zombie-like teenager to actual zombie teenager. The film also stars John Malkovich and comedian Rob Corddry and offers a spin on the zombie apocalypse genre by giving the film a romantic comedy element.

Fortunately, the indie repackaging manages to avoid the fate of others before it; Jennifer’s Body and Diablo Cody’s attempts to do cultish, scary, and quirky ended up being scarily bad.

Touted as a film about “the power of human connection” by Rotten Tomatoes, the plot revolves around Hoult playing a zombie named R, who rescues a human survivor (Teresa Palmer) from a group of zombies in the aftermath of the apocalypse. Realising he is different, she forms a connection with him and his dead body becomes warmer as he experiences human emotion.

Though most praised it as a fresh and funny twist on the zombie genre, some, like Rolling Stone, were not so impressed: “Warm Bodies even suggests that true love can help the right zombie grow a new heart. That’s a con job that makes Bodies lukewarm at best.”

Lukewarm or otherwise, for an hour and a half, you could do a lot worse.