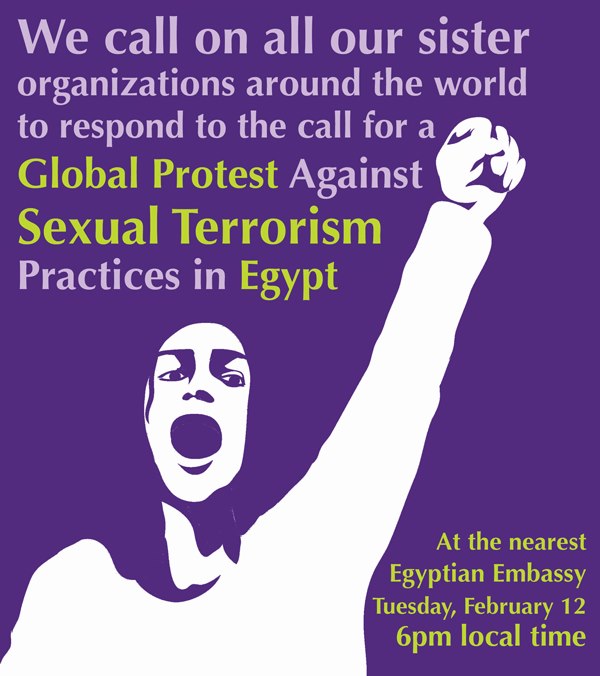 Anti-Harassment groups in Egypt called for a worldwide rally against sexual harassment.

The call for international protests came after the increasing reports of sexual assaults on female protesters.

On 25 January 2013, 19 sexual harassment cases were reported to the Operation Anti-Sexual Harassment (OpAntiSH), an Egyptian initiative to fight harassment against female protesters.

The groups called for protests next Tuesday at 6pm local time in front of Egyptian embassies across the globe.

The event was organised by The Uprising of Women in The Arab World Facebook page, with the participation of 22 countries and 17 anti-harassment groups worldwide.

“It is indeed the first time ever that a synchronised global action is happening around women of the Arab World,” said Yalda Younes, one of the co-founders of the Uprising of Women in the Arab World.

“The reason for this global sensitivity is not only compassion with Egyptians, but also because all around the Arab world and beyond, women’s bodies are still subjected to sexual violence in all its forms,” Younes explained. “In many countries there are no laws to protect us against it.”

They also claimed the media’s focus on victims’ personal lives led to blaming the victim and even sympathising with the harasser.

“We are organising a march in Tahrir [Square] or in front of the presidential palace on 12 February,” said Fathy Farid, youth initiatives coordinator at the Centre for Appropriate Communication Techniques and Development (CACT).

He added that there was another international anti-sexual harassment campaign on 14 February called One Billion Rising.

“The idea is to dance on Valentine’s Day as a peaceful way of protesting against sexual harassment, but due to the circumstances in Egypt we will participate only by singing,” Farid said.

The 14 February singing protest will be held at the Swiss Club in Imbaba at 10am with participation from Egyptian female singers and activists.