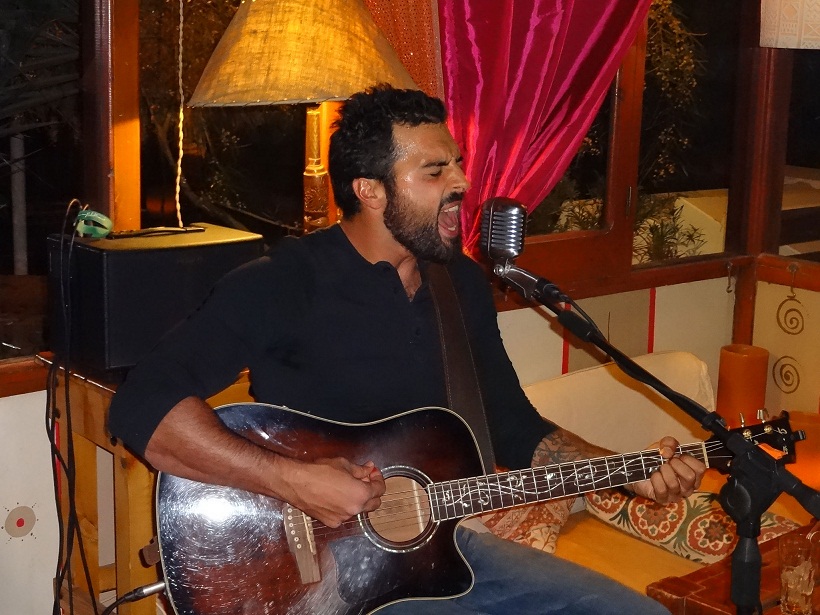 In a time where singers who play covers and accompany themselves on a semi-acoustic guitars seem to be a dime a dozen, Tamer Emad is in a refreshing league of his own.

Not only does the half British, half Egyptian Emad have a great voice, he accompanies himself with his guitar which makes the music flow seamlessly and his choice of songs is surprisingly different. We saw him perform on a Thursday night in The Club House in El-Gouna.

Emad grew up in the UK and dabbled a little in music but never seriously. “As a kid I had a couple of years of guitar lessons and I was part of a punk-rock band. That was not singing though, that was screaming,” he said. “I did not really start singing until 2007.”

It is not a coincidence that this was also the year when Emad moved to Egypt. “Living in Egypt has softened me up a little, I defrosted living here. I have learned to express myself and I have come out of my shell,” he said.

When asked why he prefers to live in Egypt, Emad is very clear: “I like the traditions even though in the beginning they were very alien to me, an English man who grew up on a council estate. I feel my roots are here and my temperament, level of sensitivity and reactions are very Egyptian.”

After a summer visit Emad decided to stay in Egypt and he moved to the family farm for a while, where he caught himself singing around the house a lot. “I would hear myself hum and sing and I liked it. My father had an old guitar and since it was lonely on the farm I had all the time to practice and learn to play the songs that I liked,” he said.

When friends invited him to Hurghada, he took a chance and played and sang in one of the local bars for food and drinks. The reaction of the audience was good and the bar owner asked him to come back. “It gave me a chance to stay in Hurghada, eat and learn on the job,” Emad said smiling.

Emad never looked back, he collected his own setup, consisting of a new semi-acoustic guitar, an old microphone from his father, a small mixer and a music stand and started playing in the local hangouts. “I remember the first gig I played where I was paid in cash and not in kind. I was completely broke, did not have money for a taxi and had not eaten in a few days but I had to get to the venue. So I walked the 15 kilometres, with all my equipment,” Emad said.

Those days are long gone though. These days Emad has a large repertoire of songs and he has started writing his own. “I sing my own versions of other people’s songs and I sometimes slip in one of my own songs but I do not announce them as such. I have close to 30 originals ready but I am waiting to go into the studio and record them properly before I start playing them in public,” he said.

When asked what makes the Thursday night gigs so popular and special, Emad said: “The Club House is the only place in town where literally everyone is welcome and I do not have to pretend, I can just be myself. It makes it easier to perform. I like to map the songs I play to tell a story and I use them to make the audience feel like I do. When that works, everything falls into place and we all have a great night.”

The large group of locals, frequent visitors, a few tourists and we certainly did last Thursday.