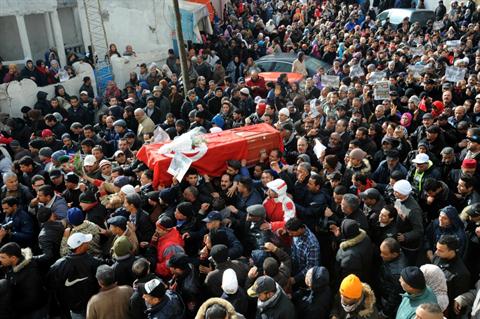 One policeman was killed, 59 were injured and 375 people were arrested in unrest sparked by the killing of opposition leftist politician Chokri Belaid, the Tunisian interior ministry said late on Saturday.

The ministry did not refer to the number of civilians hurt in the violence, and said that around a dozen security forces posts also came under attack between Wednesday and Friday.

It did not say how many offices of the ruling Islamist Ennahda party were targeted in the unrest, but AFP has counted around a dozen such incidents.

Belaid’s killing on Wednesday, in which a hooded gunman shot him dead at close range outside his home as he left for work, has plunged the north African country into political crisis two years after the revolution that launched the Arab Spring.

Prime Minister Hamadi Jebali has broken ranks with his own Ennahda party and said he plans to announce a new government composed of technocrats before the middle of next week.

Ennahda has rejected a planned new cabinet and several thousand party supporters took to the streets on Saturday to oppose his plans.

Jebali has threatened to stand down if his plan for a new government, including replacing key ministries currently held by fellow Islamists with independents, does not happen.