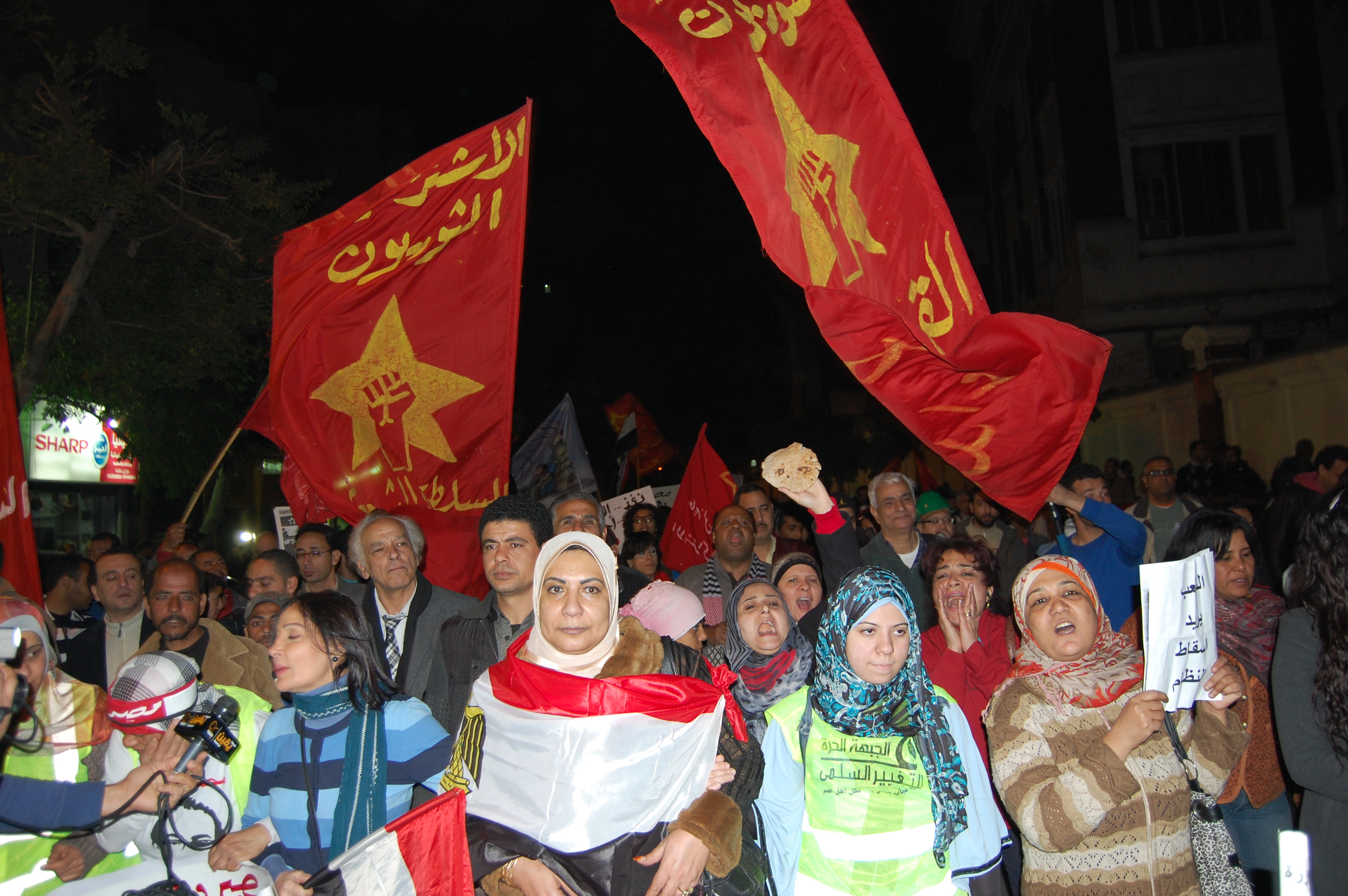 Opposition groups carried out marches and demonstrations on Monday, the two-year anniversary of the ousting of former president Hosni Mubarak. The protests stood as part of a continued escalation of street demonstrations against President Mohamed Morsi and the Muslim Brotherhood amidst ensuing political polarisation in the country.

“I want a change of government,” said Amr Mohamed, who joined the hundreds who marched from Sayeda Zeinab to Tahrir Square. “The Muslim Brotherhood do not represent Islam,” he added, saying he was not a member of any particular political group.

“There’s no stability in the country, no investments, no jobs, or any hope for the poor,” said Moataz, a protester in Tahrir Square from Sohag. “Everyone is now focusing on obtaining power when we can’t find anything to eat,” he said. “The Brotherhood turned out to be liars.”

Turnout going into Monday night proved lower than previous days in the recent past when the opposition called for demonstrations.

“The president needs to leave, because he has only been concerned with putting members [of the Muslim Brotherhood] in all the country’s institutions,” said Maher, one of a few dozen protesters who marched from the Al-Fath Mosque to the Egyptian High Court of Justice building and continued on to Tahrir Square.

Protesters at the presidential palace chanted against the Brotherhood, the president, and Ministry of the Interior, who had engaged demonstrators in clashes over the past weeks in Heliopolis.

Demonstrators, including some wearing masks, began removing the barbed wire around the presidential palace at the time of print.

The groups taking part in the 11 February marches include the Youth Movement on Behalf of Freedom and Justice, the National Front for Justice and Democracy, the Lotus Revolution Coalition, the Free Egyptian Movement, the Egyptian Social Democratic Party, the Popular Current, the Socialist Popular Alliance Party, The Freedom Egypt Party, the Al-Dostour Party, and the Free Egyptians Party.

A group of parties issued a statement on Sunday celebrating the downfall of the Mubarak regime, decrying a mismanaged transition rooted in governance by the Supreme Council of the Armed Forces (SCAF), and criticising Morsi’s governance. The group also criticised Egypt’s first post-revolution parliament for overlooking atrocities committed by the Ministry of Interior.

The statement criticised Morsi for perpetuating practices of torture, kidnapping, and repression.

“In parallel with this continuous political repression, economic and social repression increased, with the closing of factories and the dismissal of workers,” said the statement, pointing out that the government was not even able to deliver on social justice, including the determination of minimum and maximum wages.

“The only thing that has radically changed with the brave 25 January Revolution was that the people broke the barrier of fear and became determined to live in dignity.”

The signatories to the statement included the Socialist Popular Alliance Party, the Youth Movement on Behalf of Freedom and Justice, the Al-Dostour Party, the Popular Movement for the Independence of Al-Azhar, the Dignity Party, the Free Front for Peaceful Change, the Maspero Youth Union, the Arab Revolution Youth Movement, the Revolutionary Socialists, the Popular Current, the Freedom Egypt Party, the National Group for Change, and the Kefaya movement.

Marches departed from Al-Fath Mosque, Sayeda Zeinab, and Shubra, at approximately 5pm and converged on Tahrir Square. Some opposition groups also carried out marches to the presidential palace in Heliopolis from the Al-Nour and Rabaa Al-Adaweya mosques amid heightened security following the latest series of clashes at the palace on Friday.