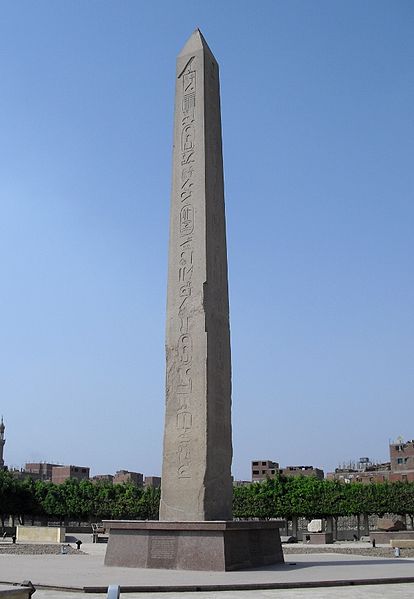 On, known today as Heliopolis or Ain-Shams, was considered the first Egyptian capital during the predynastic period and was the birthplace of the first ancient Egyptian mythology.

On was the place where creation itself was believed to take place, the spot where life began, according to Egyptian myths. On was the home of the first and the mightiest Egyptian god of all, Atum, who was believed to have risen from the Benben stone in the great temple of On to light up the dark and empty universe.

Atum was believed to be the source of all other gods, like Shu, the god of air, which he exhaled out of his nose and Tefnut, the god of moisture, which flew from his mouth, to name but a few.

According to the old beliefs people came from Atum’s tears when he cried as a result of his pain and exertions.

On’s priests and astronomers were believed, according to Herodotus and many other historians, to be the inventors of the annual calendar that we use today and the city was the centre of science, philosophy, mathematics, and astronomy. Students came from all over the world to study with its priests and scholars.

Even after the reunification of Egypt and the establishment of the city of Memphis by King Menes who wanted a new capital for Egypt, On retained its religious prestige and its priests were renowned for their skills in science and magic.

The magnificence of On gradually faded through the ages. The Greek philosopher Strabo mentioned that by the first century BC the temples were deserted and the town became uninhabited. Many of the city’s beautiful obelisks were taken to adorn European cities, including Rome and London.

The city is believed to have been razed by the Babylonian King Nebuchadnezzar who attacked Egypt in 591BC and 567 BC but there are other theories; it may have been demolished a century earlier by the Assyrians or decades later by the Persians.

The destruction of the city of On meant the destruction of all traces of the existence of the temple of the sun god Ra, the birthplace of writing, and the centre of mathematics and astronomy where the finest philosopers of Greece studied.

The only thing that remains of On is an obelisk built by the pharaoh Sesostris I.

The obelisk was one of a pair built to commemorate the 13th jubilee of Sesostris in 1940 BC, but sometime in the 12th century its twin fell, leaving the Sesostris obelisk standing alone as the only evidence of On’s magnificence. In modern times the obelisk is a site of annual pilgrimage for Egyptian peasants who gather there to celebrate the spring festival of Sham El-Nesim.

Recent tomb discoveries made on the site of On relate to the priests of the great temple, but many of the city’s treasures and sites are hiding beneath the Al-Matariyya suburb, waiting for large-scale excavations projects that may reveal the secrets of the ancient Egyptian city of On.