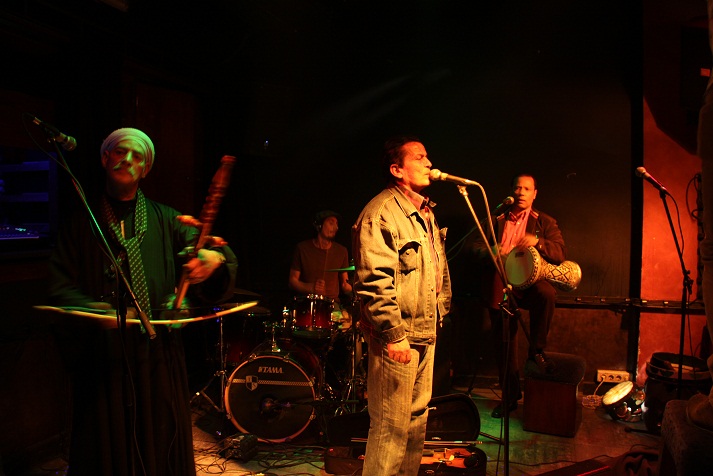 One Frenchman’s passion for the arghul, an Egyptian musical instrument that is now barely used, led him on a journey to the Middle East. That man is Jérôme Ettinger, renowned electronic music master, whose training by Mostafa Abdel Aziz on the reed-pipe arghul sparked his love for all things oriental.

Determined to find a way to unite traditional folkloric music with electronic music, Ettinger traveled to Egypt where he met Said Imam, a veteran vocalist of Egyptian folklore. Imam started composing music as a child in preparatory school and later trained with Egyptian musician Said Morsy.

Imam’s singing career began in the eighties, and continued for 25 years. During those years he released many albums in Egypt and established himself as a respected religious and folkloric singer. His most famous album is Ashky Le Meen, (To Whom Can I Complain), which featured his hit song Makansh A’shamy.

All the Egyptian Project songs are written and composed by Said Imam and Ettinger, who adds the trip-hop beats.  When asked what sets them apart from other oriental-acoustic bands, Ettinger said that they try to preserve original Egyptian music.

Although it was hard at first to mesh the folkloric music with the electronic beats, eventually they found the right sound. The main goal was to not distort Imam’s songs, but to highlight them and turn them into pop. The addition of the electronic music makes the songs more modern and accessible, while the folkloric vocals add a special mood that makes Egyptian Project very different.

Ettinger loves the Egyptian audience because they react marvelously to the songs. He said that they are reintroducing Egyptian folkloric music in a new light, and that is why people like their work because the songs are pieces of old and new culture, wrapped in mood-lifting melodies.

We saw Egyptian Project live at their performance at Cairo Jazz Club and really liked their new song Anta Ana. The song relied heavily on upbeat Egyptian percussions and the smooth arghul, which were combined with Imam’s strong vocals. The background music was enhanced by the use of the violin and the electronic beats.

The song’s lyrics revolved around sending a message to a distant lover, or habib in Arabic. The word habibi is repeated in a harmonious way, along with the beats, making for a very soulful experience. The song ended on a sad note as the habib never responded to the message and the arghul melodies with the beats ensured we had goosebumps at the end of the song.

The band has recorded a debut album, Ya Amar  which is due in March or April and is currently touring in Egypt, to be followed by shows in Morocco, France and the US to promote their new album.