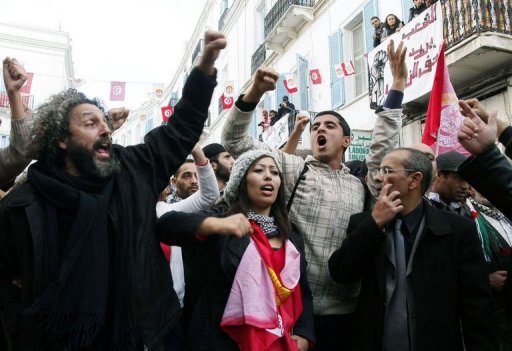 TUNIS (AFP) – Tunisian President Moncef Marzouki’s secular party said on Monday that it would stay in the ruling coalition, but demanded the resignation of key Islamist ministers amid deepening political uncertainty.

“We have decided to freeze our decision to withdraw our ministers from the government, but if in one week we don’t see any changes, we will quit the government,” said Mohamed Abbou, Congress for the Republic (CPR) party chief.

The centre-left party is demanding the resignation of the interior, justice and foreign ministers from Prime Minister Hamadi Jebali’s Islamist party Ennahda, amid soaring political tensions after the brazen killing of a leftist opposition leader.

“Two days ago we presented the resignation of our ministers, but we were contacted yesterday evening by the leaders of Ennahda, who replied favourably to all our demands,” Abbou told a news conference.

He stressed that the CPR opposed the proposed formation of a non-partisan government of technocrats, announced by Jebali last week in the wake of public outrage over the murder of Chokri Belaid, a fierce critic of the Islamists.

“We are against a government of technocrats as it would allow for the return of figures from the former regime” of ousted president Zine El Abidine Ben Ali, Abbou said.

Ennahda, which heads the coalition government, has already rejected the plan, pitting the prime minister against his own party, in which he is considered a moderate, and fuelling a political crisis.

Jebali reiterated on Monday that he had “no other choice than to form a transitional government independent of political parties,” stressing the danger of violence in Tunisia, and renewing his threat to quit if he failed to form a new cabinet.

“The situation is… urgent, there is a danger of violence. I am responsible for the government, I cannot wait,” the premier told French newspaper Le Monde.

The killing Wednesday of leftist politician Belaid, triggered three days of violent protests in which one policeman was killed and 59 others wounded, according to the interior ministry.

Jebali set a target date of the middle of this week for the shake-up, which has laid bare the divisions within his party.

Ennahda hardliners are refusing to give up the key portfolios, and have warned that they will take to the streets of the capital, as they did in on Saturday, to insist on the party’s right to govern following its October 2011 election triumph.

Ennahda leader Rached Ghannouchi has played down the party crisis.

“There will be no division within Ennahda which is committed to its institutions,” he said in an interview published in the Algerian daily El Khabar.

“The party is very strict when it comes down to its unity. Differences in opinion exist within the party and are freely expressed. That’s why I think Ennahda is not under threat.”

Since Wednesday, Tunisia has seen street clashes between police and opposition supporters and attacks on Ennahda offices, while Belaid’s funeral on Friday turned into a massive anti-Islamist rally, believed to be the largest since the revolution.

“The people want to protect the legitimacy of the ballot,” pro-Ennahda protesters shouted on Saturday on Habib Bourguiba Avenue, epicentre of the 2011 uprising that ousted ex-dictator Zine El Abidine Ben Ali.

Belaid, who accused the ruling Islamist party of stealing the revolution, was gunned down outside his home. His supporters and family openly blamed Ennahda for eliminating him — a charge it has flatly denied.

The killing has enflamed tensions between liberals and Islamists, simmering for months over the future direction of the once proudly secular Muslim nation, and stoked by a controversial pro-Ennahda militia blamed for attacks on secular opposition groups.

Divisions in the national assembly have also blocked progress on the drafting of a new constitution.