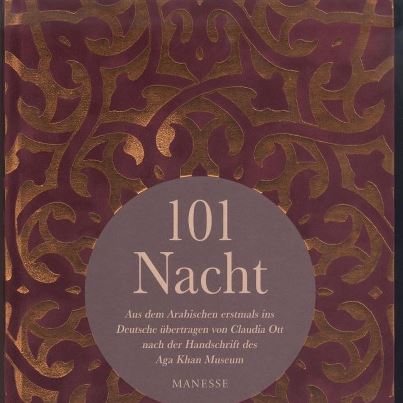 On Monday the American University in Cairo hosted a lecture by Professor Claudia Ott, professor at the Institute for Non-European Languages and Cultures. Ott has successfully translated and published the Andalusian manuscript of Mi’at Layla wa Layla, A Hundred and One Nights, from 1234 that was discovered in 2010. Ott’s book has been published in Germany under the name 101 Nacht.

In 2010 Ott was invited to play music using the Egyptian ney during the opening of the exhibition Treasures of the Aga Khan Museum at the Martin-Gropius-Bau museum in Berlin where she happened upon the manuscript. Ott described it as a magical night and she credited the ney for her discovery of the manuscript: “It was a magical flute.”

Similar to A Thousand and One Nights, or Arabian Nights, the manuscript is a collection of small stories fitted into the frame of one larger story. The larger stories are also similar in both manuscripts, where a king keeps murdering all his women after being betrayed, only to be tricked by his most recent bride through the tales she tells him. Ott noted that there are differences in the stories, the names of the characters vary, and due to the shorter manuscript, the stories are fewer.

A major difference is Scheherazade’s pregnancies, which are hinted at in A Thousand and One Nights leading the reader to conclude that she gave birth to as many as three sons. The time frame of the Andalusian manuscript does not allow for that.

In addition, the last pages of the manuscript are missing, so there is no confirmed ending for the story. However, Ott pointed to the Tunisian author Mohamed Tarshuna, whose research of 19th century manuscripts led him to propose a possible ending. Tarshuna believes that the conclusion of the story is when the king realises his bride is pregnant and pardons her.

While One Thousand and One Nights talks of the eastern side of the Arab world, One Hundred and One Nights’ stories take place in the western side. The main story of the former takes place in Persia, while the latter’s main story takes place in India after which the reader is transported to Arabia’s west. Ott notes that “at the time, India was considered the orient of the orient.”

Only two of the smaller stories are found in both manuscripts: the story of the merchant’s son and the story of the ebony horse. The rest of the stories are completely different. When asked about whether stories like Ali Baba and Ala’a Al Din existed in One Hundred and One Nights, Ott answered: “You do not need Ali Baba, when you have flying horses.”

Ott also noted the similarities between the One Hundred and One Nights manuscript and another manuscript from the same time period. The other manuscript is Ketab Al Joghrafeya or the Book of Geography by Muhammad ibn Abi Bakr al-Zuhri. Both manuscripts feature the same writing style and structural elements, leading Ott to believe that they were probably written by the same person.