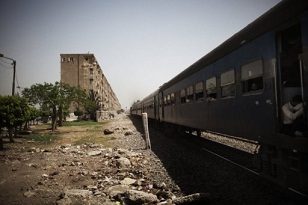 Four armed men in black masks attempted to rob passengers aboard train number 986 from Qena to Cairo late Monday, while it was stopped at the Dishna station, according to Moataz Ahmad Ismail, head of investigations in Dishna.

At approximately 11.30pm, the men boarded the train and began robbing its passengers at gunpoint, Ismail said. The Dishna station supervisor called the local authorities who responded immediately. Armed Dishna policemen formed a perimetre around the train, boarded it and successfully apprehended the four individuals, placing them under arrest, according to Ismail and Peter Moner, a reporter for Al-Watan newspaper.

The armed men had assaulted eight passengers before the police arrived, taking six mobile phones, EGP 255, some clothing and other personal items. The gunmen were taken into custody and the stolen items were returned the passengers, Ismail said.

No one was injured and the entire incident lasted approximately half an hour.

According to Ismail, there were no other gunmen and all suspects have been apprehended. However, state-owned news agency Al-Ahram, reported Tuesday morning that there were six gunmen in total and two remain at large.