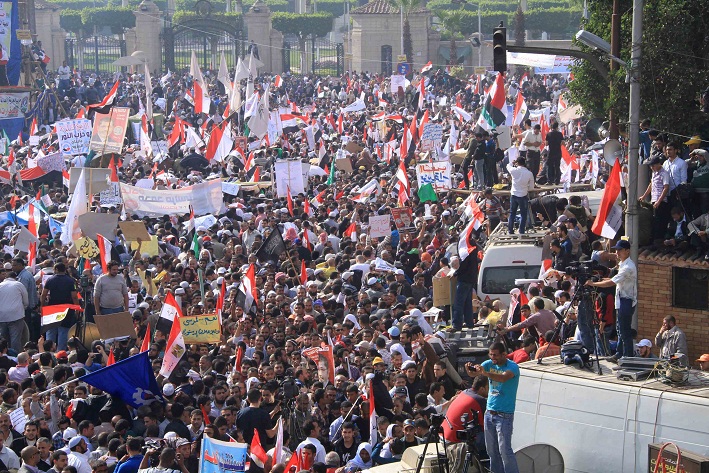 The Building and Development Party (BDP), political wing of Al-Jamaa Al-Islamiya, announced several marches that would head towards Cairo University for a mass protest scheduled to take place there on Friday.

The marches will move from the Al-Rahma Mosque in Haram, the Esteqama Mosque in Giza, The Salah El-Din Mosque in Manyal, the Assad Ibn Furat Mosque in Dokki, the Mostafa Mahmoud Mosque in Mohandessin, in addition to several marches from mosques in the districts of Boulaq and Bein El-Sarayat.

Khaled Sherif, media advisor for the BDP, said the party will provide buses to transfer protesters from Egypt’s different governorates to Cairo University in Giza. He mentioned that the party is currently receiving donations to support funding the buses.

Sherif said the protest would be calling on all political groups to refrain from violence and express their opinions peacefully. He added that his party strongly opposes violence, describing it as “destroying the Egyptian revolution”.

“We are calling everyone to respect the choice of the Egyptian people,” he said. “If opposition forces have a better plan, they should seek implementing it through the legitimate path, which is the parliament, and not through violence.”

The BDP media advisor added that the protest would call for respecting judicial verdicts, issuing legislations supporting the poor and enhancing their status, and achieving demands of national groups through unconditioned dialogue.

From those participating, Alaa Abul Nasr, BDP secretary general, said that the Freedom and Justice Party (FJP) and the Salafi Al-Nour Party did not agree on participating in the protest, adding that negotiations are still ongoing with them. Abul Nasr claimed that several Islamist groups other than the BDP would participate, however he did not specify which groups.

Ahmed Qadry, media spokesperson for the El-Watan Salafi Party, said his party is currently discussing the situation with the BDP, adding that, as things stand, they will not participate in the protest. “Yet, negotiations are ongoing and we don’t know what might happen in the upcoming days,” he said.

Sherif denied that his party is considering holding a sit-in by the end of Friday, and added that the party would form popular committee to protect protesters during the protest.