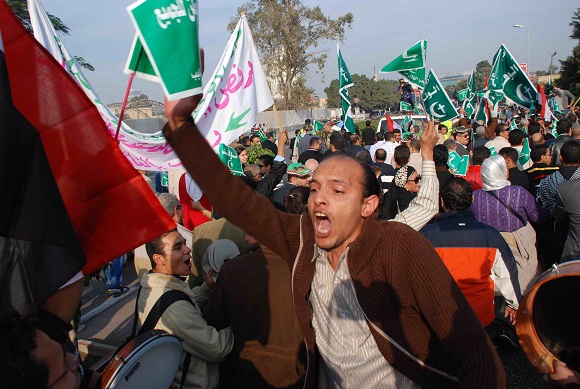 The Muslim Brotherhood has announced that it will “symbolically” participate in demonstrations renouncing violence on 15 February.

“The Muslim Brotherhood appreciates the invitation from Al-Jamaa Al-Islamiya and the Building and Development Party (BDP) for peaceful demonstrations in front of Cairo University on Friday 15 February under the banner ‘Together Against Violence’, to denounce all means of thuggery including the killing of citizens, attacks on the police, the damaging of institutions, and the disruption of production and people’s interests,” the Brotherhood statement said.

“Therefore the Muslim Brotherhood has decided to symbolically participate in this event,” said the statement, which also highlighted the Brotherhood’s “Together we build Egypt” initiative.

The Brotherhood blamed various political groups and figures, as well as the Egyptian media, for the current instability.

The BDP, Al-Jamaa Al-Islamiya’s political wing, announced several marches that will head towards Cairo University for a mass protest scheduled to take place there on Friday.

The marches will begin from the Al-Rahma Mosque in Haram, the Esteqama Mosque in Giza, the Salah El-Din Mosque in Manial, the Assad Ibn Furat Mosque in Dokki, the Mostafa Mahmoud Mosque in Mohandessin, and from several mosques in the Boulaq and Bein El-Sarayat districts.

The BDP said the protests would call for respecting judicial verdicts and issuing legislation supporting the poor, and would ask political groups such as the National Salvation Front (NSF) to engage in unconditional dialogue.

The Muslim Brotherhood previously announced its “symbolic” participation in September demonstrations against the film Innocence of Muslims. The September protests saw lower turnouts and mobilisation than usually seen in Islamist-initiated demonstrations.