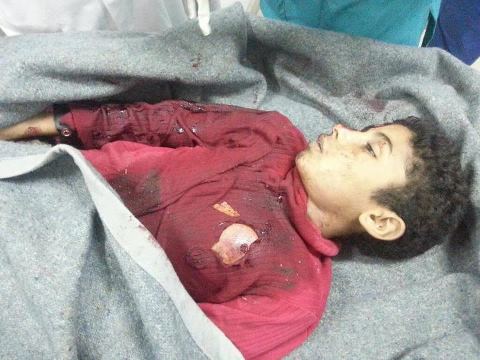 A street vendor “accidently” shot dead by police earlier this month was a child.

On 3 February, Omar Salah Omran, 12, was selling sweet potatoes in a street near Downtown  Cairo when a policeman shot him in the chest, killing him.

An interview of Omran recorded last year matches the picture of the child’s dead body that doctors in the Zeinhom morgue showed activists as they were looking for missing activist Mohamed El-Shafie. In the recorded interview with local charity Lifemakers, Omar said he had been selling sweet potatoes onthe street for five years and that his father had died one year earlier. When asked by the charity what his wishes were, Omar said he wanted to quit his job and learn to read and write.

No to Military Trials for Civilians (NoMilTrials) movement member Maha Maamoun told Daily News Egypt that Omar’s body arrived at Zeinhom morgue on 3 February and that his family picked it up the next day. The Ministry of Interior had announced the same day that a Central Security Forces (CSF) conscript accidently shot a street vendor near the American embassy in Cairo but did not mention the street vendor’s age. The conscript was “joking around with the child” when his gun accidently went off. The conscript has since been arrested, the ministry statement said.

NoMilTrials members Rasha Azab and Nazly Hussein spoke to doctors at the Mounira Hospital where Omar’s body was first brought. Azab said doctors told them the child was dead when he arrived and that the accompanying police officers had orders not to register him with the hospital if he died.

She added that army soldiers, not police, brought the body to the morgue. Azab also said she spoke to eyewitnesses who also claimed that an army conscript, and not the police, had shot the boy.

The Egyptian Organisation for Human Rights (EOHR) released a statement condemning the incident. “The shooting [of the child] proves that contrary to its claims, the Ministry of Interior does indeed  provide its men with live ammunition and real bullets,” the statement read.

EOHR President Hafez Abu Seada called the incident a “heinous crime” that violates “one of the basic human rights, which is the right to life”. The organisation called on the Ministry of Interior to open an investigation immediately and bring the culprit to justice.