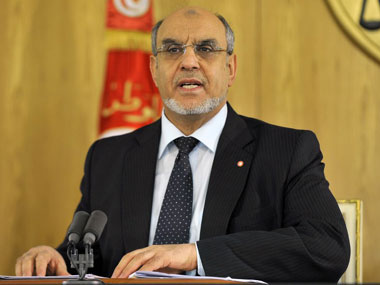 (AFP) — Tunisia’s ruling Ennahda party said Tuesday it could leave power, throwing Prime Minister Hamadi Jebali a lifeline in his quest to form a government of technocrats and steer the country out of its crisis.

“Ennahda could quit power if Jebali maintains his proposal. Everything is possible. It is not inevitable for Ennahda to stay in the government,” Foreign Minister Rafik Abdessalem said.

“Dialogue continues. The doors are not closed,” Abdessalem, a son-in-law of Ennahda party chief Rached Ghannouchi, said on the pan-Arab news channel Al-Arabiya.

Abdessalem’s remarks were the first by a key Ennahda official suggesting that the Islamist party, which controls 89 of the 217 seats in the National Constituent Assembly after an October 2011 election, could back down.

Jebali has been seeking political support for his plan to form a non-partisan cabinet of technocrats, after the assassination last week of a leftist opposition figure threw Tunisia into turmoil.

But Jebali has been facing stiff resistance from Ennahda, which has been blamed for the cold-blooded murder of Chokri Belaid who was a staunch critic of the government.

Jebali was warned of chaos and threatened to quit if he is unable to go form a new government by the middle of the week.

Assembly speaker Mustapha Ben Jaafar earlier said that he would “strongly support” Jebali, adding that the country was in a “critical situation” following Belaid’s murder.

Ben Jaafar, the leader of the secular Ettakatol, an ally of Ennahda, said he was ready to hand over all ministerial positions controlled by his party, including finance, tourism and education.

“It’s make or break, but we don’t want to break it,” he said, adding he hoped Ennahda would put “national interests above partisan interests”.

Ghannouchi had also opened the door for a possible compromise on the future government.

“The government that can save the situation in the country… is a government of national coalition,” he said, insisting however that it must “represent all the political forces”.

Jebali, meanwhile, has been holding consultations with politicians and legal experts.

Ben Jaafar said talks were under way with around six allies of Ennahda including Ettakatol and President Moncef Marzouki’s centre-left Congress for the Republic party (CPR) which had threatened to pull out of the government.

CPR chief Mohamed Abbou, however, told reporters on Monday: “We have decided to freeze our decision to withdraw our ministers from the government, but if in one week we don’t see any changes, we will quit the government”.

On Monday, hundreds of Tunisians protested outside the national assembly demanding the government’s resignation, among them Belaid’s widow, Besma Khalfaoui who called for the resignation of the Islamist-led government.

“This government must resign today, not tomorrow or the day after tomorrow. It must not wait,” she told AFP.

“Those are the rules of the political game: when a government fails, it must take responsibility.”

Both the powerful General Union of Tunisian Workers and the union of employers UTICA have expressed support for Jebali’s initiative, seeing in it a way to emerge from the crisis.

Ennahda hardliners refuse to give up key portfolios and have warned they will take to the streets of the capital, as they did on Saturday, to insist on the party’s right to govern following its October 2011 election triumph.

The 6 February killing of Belaid has inflamed tensions between liberals and Islamists over the direction of the once proudly secular Muslim nation, with opposition protesters engaging in street clashes with police.

Tunisia is also witnessing a deadlock over the drafting of the constitution, 15 months after the election of the assembly, and the country has been further destabilised by the rise of Salafists, accused of deadly attacks.

Poverty and unemployment, two key factors that led to the revolution, continue to grip the country.