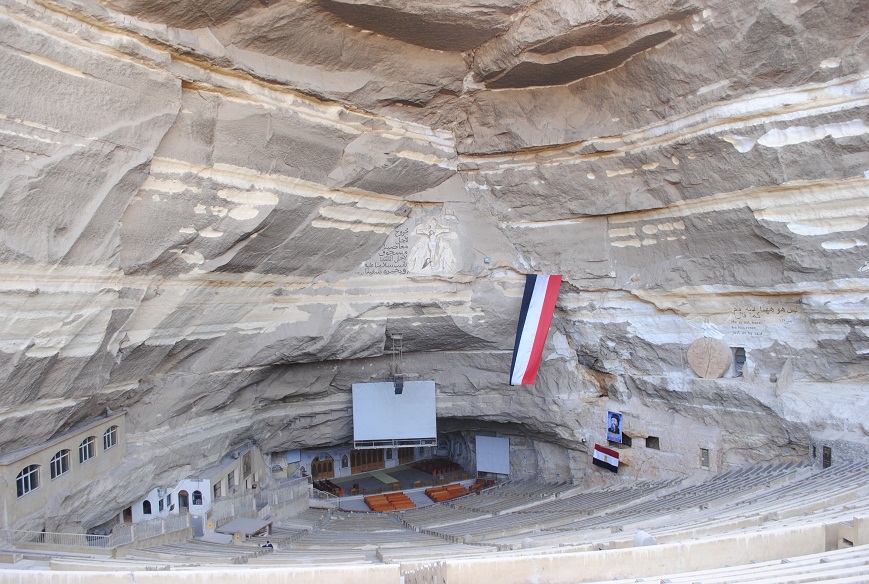 Hidden in the small streets of the Zabaleen, or the garbage collectors area, at the foot of Moqattam, the Saint Samaan church stands as a testament to the faith of many Egyptians.

In 1969 when 15,000 Christian Egyptians collectively left their home villages in Assiut for Cairo to seek work and a better standard of living, the families were given permission by then-president Gamal Abdul-Nasser to live in a deserted area by Moqattam hill. The ramshackle houses turned into the busy area now known as Mansheyet Nasser, or Zabaleen.

The families made their living as garbage collectors and made recycling into a profession. To this day every morning piles of trash are dumped in the area by dozens of garbage trucks from all around Cairo and families collect garbage themselves using small donkey carts in the different neighbourhoods of Cairo. Once the garbage is collected it is sorted and recycled.

Deep inside the neighbourhood, the Saint Samaan church is carved in the side of the mountain, and is the spiritual heart of the community.

Construction of the church started in 1974 by the Egyptian cleric Samaan Ibrahim, going through many phases until reaching its current shape. The first church was built with steel and iron sheets. Two years later a brick building was added to celebrate religious holidays. The unexpected growth of the church’s congregation inspired its founders, Samaan Ibrahim and his companions, to expand the church to its current magnificent form and it has become one of the most significant churches in Egypt.

The church bears the name Samaan Al-Kharaz, or Samaan the Tanner, who lived during the rule of the first Fatimid Caliph El-Moez. El-Moez intended to expand Cairo; hoping to make the city the capital of his kingdom. However, his intentions were hampered by a large hill blocking an area where he wanted to build.

The pope of the Egyptian church at that time, Abram, was challenged by the caliph’s Jewish grand vizier to apply the biblical verse that states that whoever has a tiny amount of faith inside his heart can move a mountain. He asked him to move the hill and three days later the pope, assisted by a tanner called Samaan, succeeded in moving the hill to its current place, naming it Moqattam, which in Arabic means “the chopped.” A large mosaic hanging above the church’s entrance displays the tale of the movement of the hill.

Many Egyptians believe in Samaan’s miracle and the story was preserved by the Egyptian historian Al-Maqrizi, who lived during the Fatimid era and mentioned the establishment of the church, its name and location in his chronicles.

The hill behind the church is adorned by many colourful carved figures, displaying the passion of the Christ, Christ’s journey to Egypt, biblical verses and the Egyptian pope Shenouda. All carvings were done by a Polish artist called Mario, who settled in Egypt in 1995 and was commissioned by the church’s founder and current cleric Samaan Ibrahim to carry out these artworks.

The style of the church exploits the hill’s caves and the church’s largest hall is an amphitheatre which seats around 10,000 people. The area includes playgrounds for kids, a cafeteria, a library, the administration office and the monastery. The church is open for visitors and tourists and its spectacular location, unique structure and style and the wonderful carvings adorning the hill make it well worth a visit.