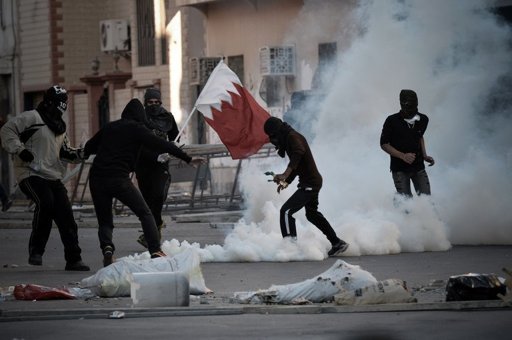 Police also used sound bombs to disperse thousands of opposition supporters who staged a mid-afternoon demonstration on the Boudaya highway that links a string of Shi’a-populated villages with the capital Manama, witnesses said.

Waving national flags, protesters chanted “Down with the dictatorship!” as they were led by Sheikh Ali Salman of Al-Wefaq, who heads the main Shi’a opposition group.

Bahrain has seen two years of political upheaval linked to opposition demands for a constitutional monarchy.

The latest wave of protests and clashes that began on Thursday comes as the opposition engages the authorities in a new round of a national dialogue aimed at resolving the deadlock.

“The government will not permit the use of violence to pressure negotiators,” Justice Minister Sheikh Khaled al-Khalifa, who is also coordinator of the national dialogue, said Friday.

“Whoever claims to be serious and real should not incite violence.”

Demonstrations on Thursday coinciding with the actual anniversary of the start of the uprising on February 14, 2011 turned deadly when a teenager was killed by police gunfire in a village near Manama.

Clashes raged sporadically in other outlying Shi’a villages through the night and into the early hours of Friday, during which a policeman was killed by a petrol bomb, the interior ministry said.

“Police officer Mohamed Atef, hit by an incendiary device which seriously injured him, died soon after he was admitted to hospital,” public security chief Major-General Tariq al-Hassan said in an interior ministry statement.

Protesters hurled petrol bombs, iron bars and stones at police in the Shi’a-populated village of Al-Sahla where the incident occurred, Hassan said.

The opposition identified the teenager slain on Thursday as Hussein al-Jaziri, saying he was killed in the Shi’a village of Daih near Manama.

Jaziri was “wounded by a shotgun that regime forces fired… He was severely wounded in his stomach and died at the hospital,” said Al-Wefaq.

The official BNA news agency said two police officers are being questioned over the killing which the opposition called “cold-blooded.”

“The people are steadfast in getting their legitimate rights… for a democratic transition,” said a statement by the opposition, which demands a full constitutional monarchy, an elected government and an end to discrimination.

Several groups including Al-Wefaq had called for strikes and nationwide protests on Thursday and Friday to mark the Arab Spring-inspired uprising that was crushed about a month after it began by security forces including troops from neighbouring Saudi Arabia.

The latest unrest comes amid a fresh round of a national dialogue between opposition groups and the government.

Hailed by the United States as a positive step that could bring reforms that satisfy all Bahrainis, the talks resumed at the weekend for the first time since they broke down in mid-2011, with a second session held on Wednesday.

The opposition is demanding that the results of the dialogue be put to a referendum and not submitted to King Hamad for approval.

Its representative Sayed Jameel Khadim said agreement was reached in Wednesday’s talks for the regime to act as “a main party in the dialogue and that its outcomes be turned into constitutional drafts.”

The more radical clandestine February 14 Revolution Youth Coalition rejects dialogue and insists on overthrowing the monarchy in Bahrain, which is home to the US Fifth Fleet.

Two years of unrest have left at least 80 people dead, according to international rights groups, and many detained activists are on trial.