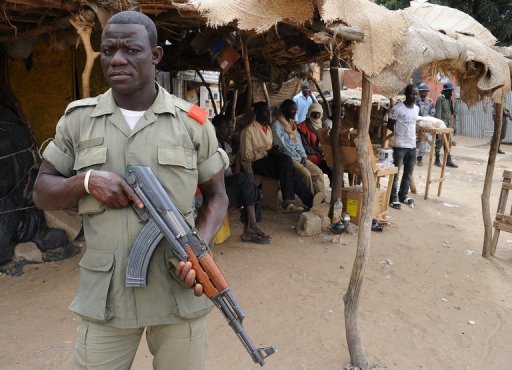 By Serge Daniel (AFP) –  Mali — Boncana Amadou, the 93-year-old chief of the village of Kadji in northern Mali, points a worn finger toward the Niger river and a strip of land down the middle that locals call “Fundamentalist Island”.

“Do you see that there?” Amadou says. “Those are Malian fundamentalists living there, and they’ve been sheltering Islamists from MUJAO.”

MUJAO is the Movement for Oneness and Jihad in West Africa, one of three armed Islamist groups that seized Mali’s vast desert north for 10 months before a French-led military campaign launched on January 11 forced them from the towns under their control.

MUJAO’s stronghold was Gao, the largest city in northern Mali, which the fighters from the Al-Qaeda offshoot have continued attacking with suicide bombings and a street battle in recent days.

A village of around 6,000 people, it is divided between the high river bank and an island below, straddling a strand of the Niger with no bridge between the two parts.

“That part of my village has escaped my control,” says Amadou, sitting in front of a mud hut.

Ansar Sunna was founded more than 25 years ago and preaches a “radical Islam”, says Mamadou Adama, deputy mayor of the district that includes Kadji and 12 other villages.

“Today it has spread all around this region,” Adama says.

Bossou, a cousin of the village chief who has visited the island, says men with guns guard the entrance to the collection of mud huts where its residents live.

There is also a combat training camp on the east side of the island, he says.

“Most of the (MUJAO) recruits in this region come from the island. There are Nigeriens, Ivorians, Nigerians, Senegalese and Malians there,” says Ibrahim Toure, another district official.

He and other witnesses say MUJAO fighters are hiding out in Kadji.

“A boat took them all to the island… with 13 cases of ammunition,” he says.

“That island is where Islamist fighters departed from to go attack the police station in Gao” on Sunday, he adds — a street battle that lasted several hours and killed at least three civilians, according to hospital sources.

The Malian army came to Kadji two weeks ago but took no action against the training camp on the island, according to the village council.

Mali’s army, which is under-equipped and deeply divided, suffered a string of humiliating defeats by the rebels before France stepped in.

Ousman Cisse, a teacher from Kadji who now lives in Gao, says he fears Islamist rebels will keep staging attacks up and down the Niger, which cuts a large arc through northern Mali, unless their base on the island is eliminated.

“They’re going to use it as their launch pad for all their operations. From that island, by boat, you can go more than 200 kilometres throughout the region,” he says.

“They’re capable of anything,” says Oumar, a nurse’s aide in Gao, who asks that his last name not be used. “That Fundamentalist Island needs to be destroyed as soon as possible.”