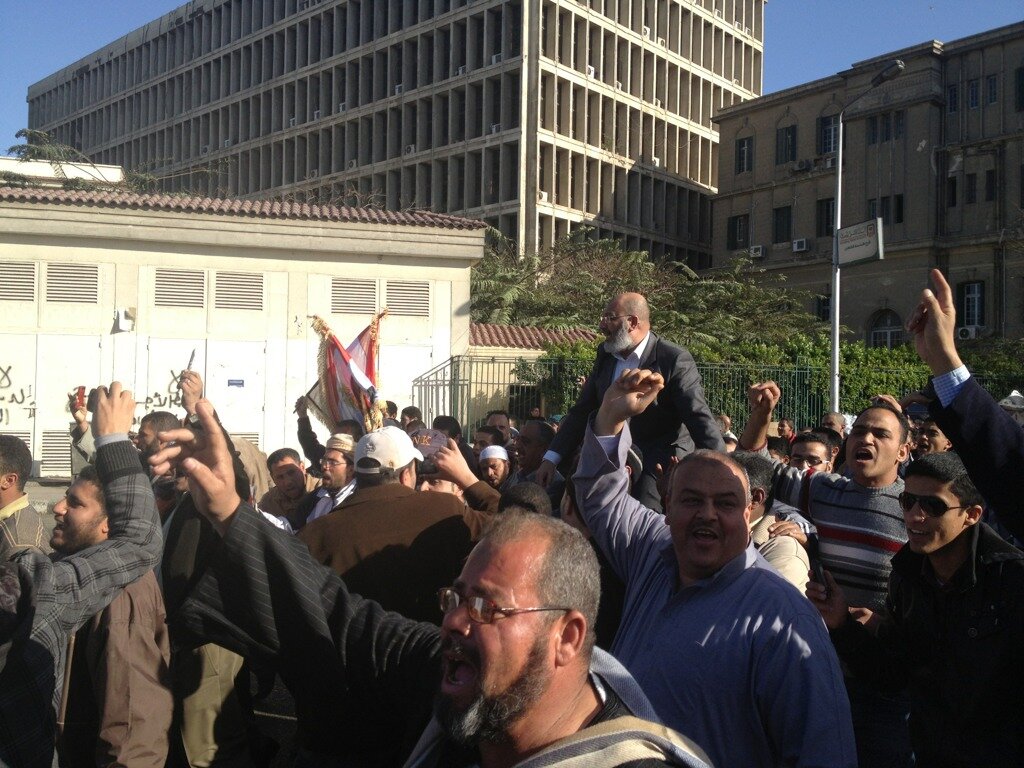 Thousands of demonstrators converged in front of Cairo University on Friday in a protest against violence called by Al-Jamaa Al-Islamiya and its political wing, the Building and Development party.

Speakers from various Islamist parties and groups spoke from a stage in the square in front of the university in Giza as demonstrators held up signs featuring President Mohamed Morsi and Omar Abdel Rahman, who is serving a life sentence in the United States.

The protest was organised to speak out against recent and ongoing violence between demonstrators and the police, which has occurred across the country and at the Itihadiya presidential palace, where opposition forces have protested against Morsi and the Muslim Brotherhood.

The Muslim Brotherhood announced its “symbolic” support for the rally, but did not mobilise its members from other governorates as it did for a rally in the same location at the end of last year.

However, a prominent member of the Brotherhood and the Freedom and Justice party (FJP) Mohamed Al-Beltagy spoke at the rally. He called on all parties and citizens to condemn violence and chaos.

Safwat Hegazy blamed “thugs” and secularists for attempting to hijack the Egyptian revolution, saying that the president’s legitimacy was a “red line”.

“I came to demonstrate to show that these are the Egyptian people,” said Ahmed Mohsen, a 40 year-old demonstrator holding a sign that read “No to violence”.

“Those spreading chaos are not the real Egyptian youth,” he added. “They simply want to overthrow the state”.

“True Egyptians love their country and their religion,” said Mohsen. He blamed the National Salvation Front (NSF) for the upswing of violence, saying the opposition front attempted to profit politically from the widespread chaos. Other demonstrators shared this sentiment.

“The whole world knows who is responsible for the violence,” said Ayman Abdallah, who said he had come to peacefully defend Shari’a law, Islam, and President Morsi.

Check Photo Gallery of demonstration in front of Cairo University