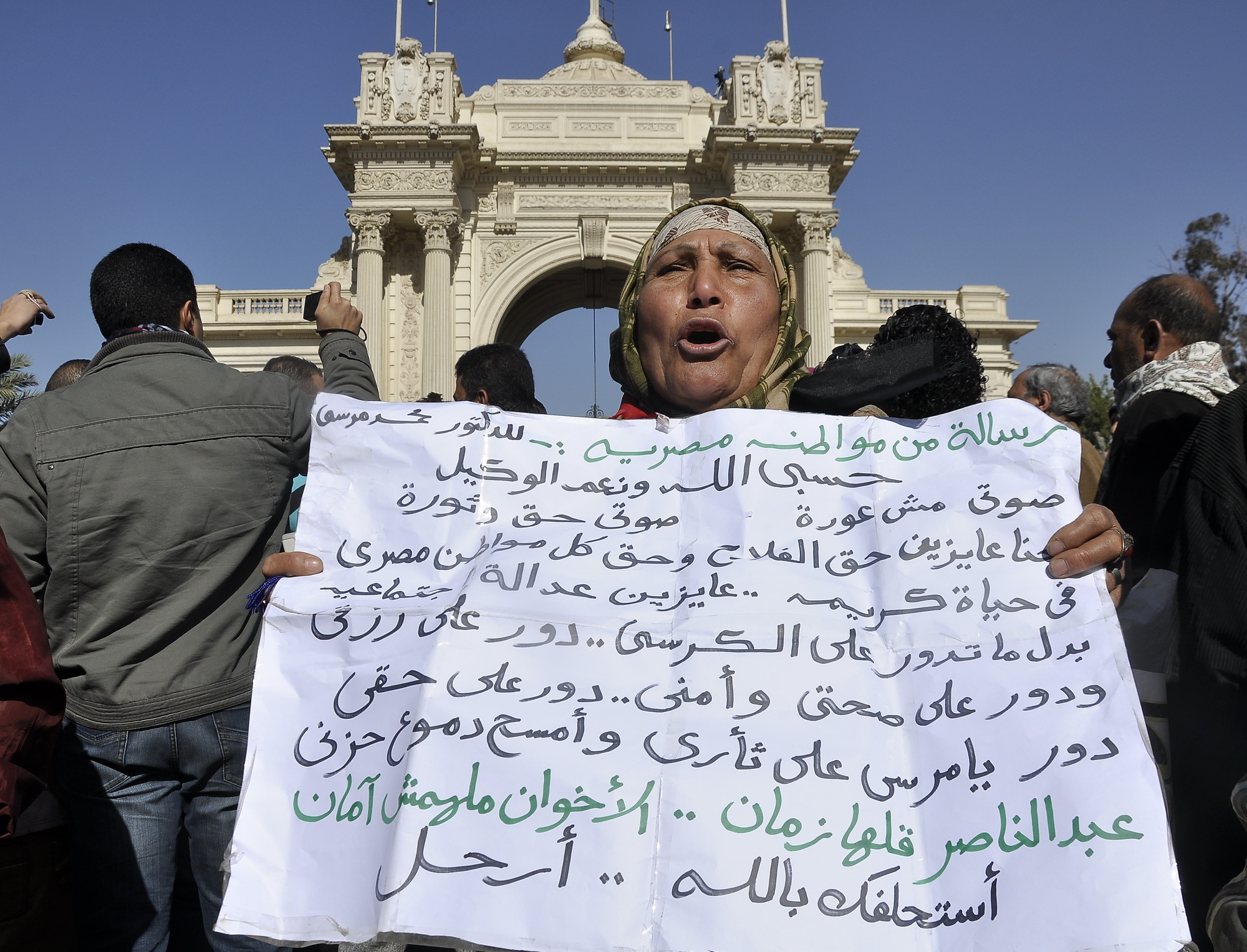 Several marches heading towards the Al-Qubba presidential palace took place on Friday to protest what many see as the failure of the current government to bring real reform to the country. The Hadayek Qubba revolutionary youth movement had called for the protest, which began in several locations across Cairo including Al-Sheikh Kashk Mosque, Al-Nour Mosque, Al-Matarawy Mosque, and Al-Alf Al-Maskan Square.

There were no political banners present at the Al-Qubba palace. Members of political movements attended as citizens, independent from their parties.

“This is not a formal protest organised by any political party,” Aly Malak of the Dostour party said, adding that people were still unhappy with the situation in Egypt and President Mohamed Morsi’s decisions.

At the time of writing, several hundred people had gathered in front of the palace to protest Morsi’s presidency and the government in its entirety. Kareem Amr, a university student and member of the Haddayek Qubba revolutionary youth movement, said that it was their responsibility to protect facilities in the area from any acts of violence committed at the protest. “We have called for this march, and so it is our responsibility to ensure violence does not break out between protesters,” Amr said, adding this was necessary to avoid being accused of involvement in acts of destruction or violence.

“This is a message to the system,” Amr said. “We demand the fall of the current system, and we will continue to protest the system until the last drop of blood is spilt from our bodies or the system is brought under.” Amr said the president had failed in providing security for the country or justice for the “martyrs” of the revolution, adding that Morsi has propagated the role of Mubarak in cracking down on civil dissent.

There was no police presence to be seen in the area, and some protesters managed to jump the fence erected around the entrance to the palace, tagging the building with calls for the downfall of the Supreme Guide of the Muslim Brotherhood.

Bilaal Abdul Sadik, an older man and avid supporter of the revolution, said he was present to lend support to the cause because the revolution must continue. “There is no freedom, there is no real change,” he said. “This regime is the same as the last, and we demand a new president based on new elections.”

Abdul Sadik said the revolution will only be concluded once genuine reform is carried out, namely reforms to the Ministry of Interior and other government institutions. The ministry, he added, is an outdated concept from previous governments which has no place in the post-revolutionary Egypt the people fought to achieve.

Other demands include trials that bring justice for those who died in the revolution and those who have died at the hands of the current government. Minimum and maximum wage laws, one protester added, are a further issue the government has failed to properly address.

Summer, a Dostour party member, said the government needs to create a better security plan that does not involve killing protesters. Commenting on the new draft protest law currently being referred to the Shura Council, Summer says she doubts the government will be able to enact it. “We had a revolution primarily to liberate ourselves from such repressive laws,” she added.

“Morsi has tried to put his people before the nation,” Summer said. “Presidents are not supposed to do this.”