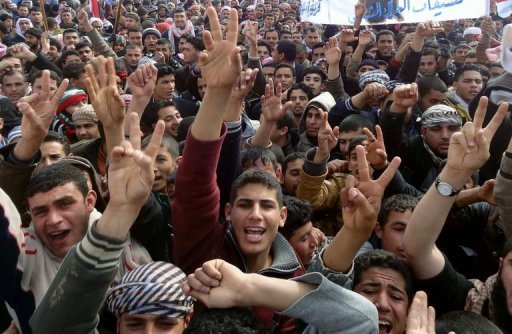 AFP – Thousands of people in Sunni-majority areas of Iraq called on Friday for the government’s fall amid a spike in violence that has accompanied a political stalemate two months before provincial polls.

The demonstrations, which have been ongoing for nearly two months, have steadfastly urged for the ouster of Prime Minister Nuri al-Maliki while decrying the alleged targeting of minority Sunnis by the Shiite-led authorities.

On Friday, the protests began after weekly Muslim prayers in Mosul, Samarra, Kirkuk, Baquba, Ramadi and Fallujah — all predominantly Sunni — as well as Sunni-majority areas of Baghdad under heavy security as the central government has voiced fears the rallies had been infiltrated by militants.

“There is no meaning to freedom in a country where criminals are free,” read one banner in Samarra, while another warned central government officials, “Baghdad, we are coming”.

“The rulers must look at the conditions of the people who, in spite of their poverty and pain, continue to live,” said Sheikh Abu Ala al-Hassani, in a speech to protesters in Mosul.

“Now, we have passed 50 days on strike, and we are still demanding … that officials be held responsible.”

The demonstrations were initially sparked in December by the arrest of several guards of Finance Minister Rafa al-Essawi, a leading Sunni, and the longest-running of them have blocked off a key trade route linking Baghdad to Jordan and Syria.

But they have since expanded markedly, and the government has sought to curtail them by claiming to have released thousands of detainees and raising the salaries of Sunni militiamen fighting Al-Qaeda extremists.

It has also restricted movements in major cities on Fridays, when the largest of these protests are held.

Maliki, meanwhile, has been grappling with a political crisis that has pitted him against many of his government partners barely two months before provincial elections, Iraq’s first since March 2010 parliamentary polls.