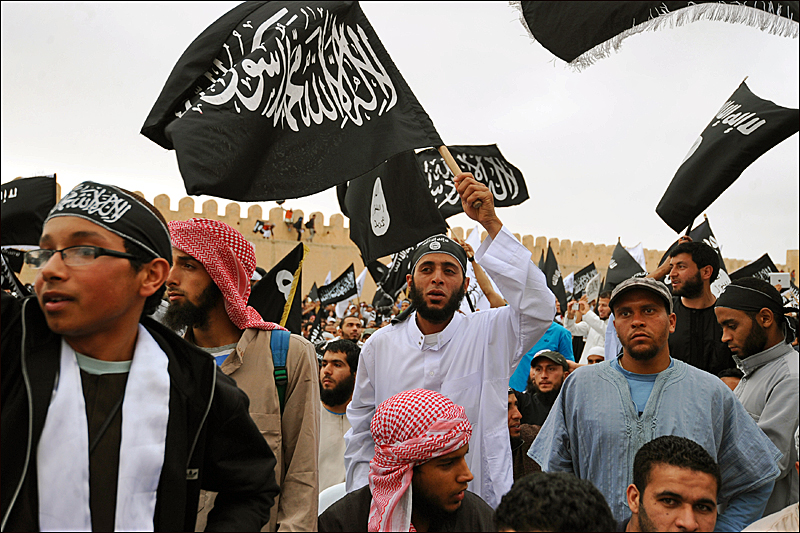 AFP – Tunisian jihadist groups, taking advantage of a political crisis after last week’s assassination of a vocal critic of the Islamist-led government, have set up patrols to police towns and keep the peace, witnesses said.

Wearing orange vests and armed with clubs, the militants patrol by night on foot, motorcycles or by car “to protect people and property,” the jihadist Ansar al-Shari’a group said on its official Facebook page.

They have been seen in Tunisia’s second city Sfax in the southeast, in Kef and Mateur in the north, in a half a dozen Tunis neighbourhoods and in the central city of Sidi Bouzid, said witnesses and the Facebook page.

On Wednesday their commanders ordered them, however, to get off the streets “because of the threats of the so-called” Interior Minister Ali Larayedh, a member of the Islamist ruling Ennahda party and bete noire of the jihadists.

But the orders posted on Facebook urged the jihadists to continue nevertheless to protect their homes and “stay vigilant” amid accusations by the group that the police are hunting down its militants.

Interior ministry spokesman Khaled Tarrouche has warned that the country’s “security forces alone have the right to maintain law and order and protect citizens and their property, in cooperation with the national army.”

“As much as the ministry praises the initiative of some citizens to protect their surroundings from acts of violence, it also reminds (the population) that no one can replace the security apparatus,” he said.

Larayedh said on state television that he would not tolerate any patrols by jihadists.

The group has since reported that one of its members who took part in a patrol in the impoverished Tunis suburb Sijoumi had been arrested by security forces and that police were searching for others.

Two years on from the revolution that toppled the dictatorship of former president Zine El Abidine Ben Ali and brought to power the moderate Islamist party Ennahda, the influence of Salafist jihadists has grown in Tunisia.

The Salafists, known for their radical version of Sunni Islam, are flexing their muscles as Tunisia battles lawlessness and political and social turmoil that has swept the country since the start of the revolution that triggered the Arab Spring uprisings across the Arab world.

The February 6 killing in Tunis of leftist leader Chokri Belaid has further inflamed the tensions in the once proudly secular Muslim nation.

The Muslim extremists are believed to number between 3,000 and 10,000 and are held responsible for a wave of violence, including an attack on the US embassy in September.

The first jihadist patrols were seen in Sidi Bouzid, cradle of the revolution, a day after the funeral last Friday of Belaid, an AFP reporter said.

The funeral became a mass protest against Tunisia’s new Islamist rulers and sparked clashes in Sidi Bouzid between protesters and police.

Soon after the security forces were forced out of parts of the city on Saturday, the jihadists launched their patrols, with reinforcements coming from surrounding towns.

Incidents erupted on Sunday night between jihadists and residents of the Nour neighbourhood, where the revolution’s first protests had erupted back in December 2010.

The group has also issued several statements this week, including one condemning the burial of Belaid in a Muslim cemetery and denouncing the leftist politician as an “unbeliever”.

Ansar Al-Sharia was brutally repressed under Ben Ali’s regime and its fugitive leader Abu Iyadh, whose real name is Seif Allah Ibn Hussein, is the suspected organiser of an attack on the US embassy in September, in which four people died.

Earlier this month a Tunisia judge barred a private radio station from broadcasting an interview with Abu Iyadh, a former pro-Taliban combatant who was jailed by Ben Ali’s regime.