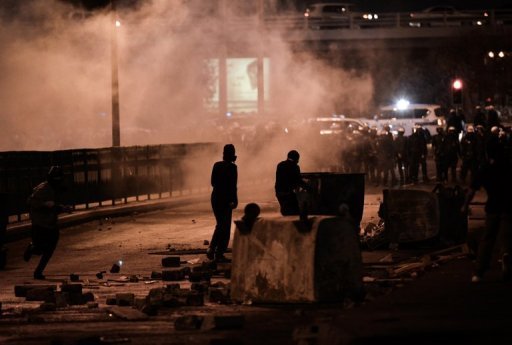 Clashes broke out on Saturday at the funeral in Bahrain of a teenager killed in protests marking the second anniversary of a Shiite-led uprising, with police using tear gas against mourners, witnesses said.

The security forces blocked access to Hussein al-Jaziri’s funeral in the Shiite-populated village of Daih near the capital Manama, firing tear gas and stun grenades to disperse dozens of people trying to push their way through.

Jaziri, 16, died on Thursday after being shot in the stomach by security forces, according to Al-Wefaq, the main Shiite opposition bloc, during Shiite-led protests against the kingdom’s Sunni rulers in which a policeman was also killed.

The BNA news agency reported late Friday that two police officers had been placed in “preventive detention” in connection with Jaziri’s death.

After the burial, which witnesses said was attended by thousands of people, a crowd of protesters tried to march on “Pearl Square” in Manama, the focus of the February-March 2011 uprising.

Witnesses said several people were injured when police fired tear gas to disperse them. One was seriously wounded when hit by buckshot fired by security forces, Al-Wefaq said on Twitter.

The authorities earlier said four people were arrested after an overnight attack on security forces that wounded four policemen.

It came during unrest that began on Friday when protesters blocked a highway linking a string of Shiite villages with the capital.

The interior ministry said in a statement that it had “arrested four terrorists possessing weapons with which they had fired on security forces in Karzakan,” a Shiite village southwest of Manama.

A police officer and three other policemen were taken to hospital after being wounded “by buckshot fired by a terrorist group,” police chief Tareq al-Hassan said in statement.

The security forces “had to respond to the attack to defend themselves,” Hassan added, without giving further details of the attack or the police response.

Bahrain has seen two years of political upheaval linked to opposition demands for a real constitutional monarchy, with the unrest claiming at least 80 lives, according to international rights groups.

Thursday’s violence, in which Jaziri and police officer Mohamed Atef were killed, began with demonstrations to coincide with the actual anniversary of the start of the uprising on 14 February, 2011.

Clashes raged sporadically in Shiite villages throughout the night and into early Friday.

The latest unrest comes against the background of a fresh round of a national dialogue between opposition groups and the government.