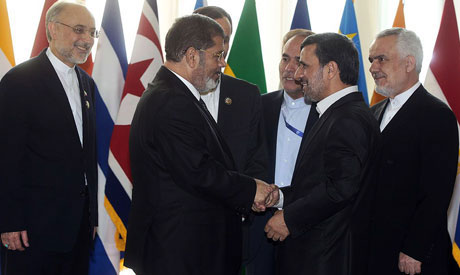 Advisors to Iranian Grand Ayatollah Ali Khamenei have sent a letter to President Mohamed Morsi offering him advice, drawing on Iran’s experience as an Islamic state.

The letter, addressed directly to Morsi, expresses the willingness of 17 scientists and thinkers to share their scholarly experience with Egypt, reported state-affiliated Ahram Gate.

The letter details a number of Iranian achievements since the 1979 revolution. It places great importance on the principles of Islam, describing them as “a reference point to address all of the problems at national and international levels”.

“Iran has been able to achieve impressive development achievements in various areas of political, economic, and cultural reconstruction,” read the letter.

The letter cited facts and figures from United Nations organisations and other international organisations which show positive development in areas such as education, internet access, and energy production.

The final part of the letter asserts that the knowledge and experience possessed by Iranian scientists and thinkers is at the full disposal of the Egyptian government.  It calls on Morsi to make Islam the basis for managing Egypt “without worrying about international pressure and the so-called enlightenment movement that seeks to separate religion from politics, culture and economy”.

The letter was originally published by Iranian state news agency FARS and was reprinted by Ahram Gate on Saturday.

The idea of using Islam as a basis for ruling Egypt was one of the major talking points during the drafting of Egypt’s new constitution. Members of the constituent assembly questioned the wording of Article 2 of Egypt’s constitution, which states that the principles of Islamic Sharia are the main source of legislation. Some Salafis requested that the word “principles” be replaced by “rulings” or omitted altogether.

Relations between Egypt and Iran have improved slightly since Morsi came to power. Morsi made a historic visit to Tehran in August. At the beginning of February, Iranian President Mahmoud Ahmadinejad became the first Iranian head of state to visit Egypt since the 1979 revolution.

Following a meeting with Morsi, Ahmadinejad said that he believed his visit will “definitely affect” relations between Egypt and Iran and he looked forward to strengthening ties between the two countries.