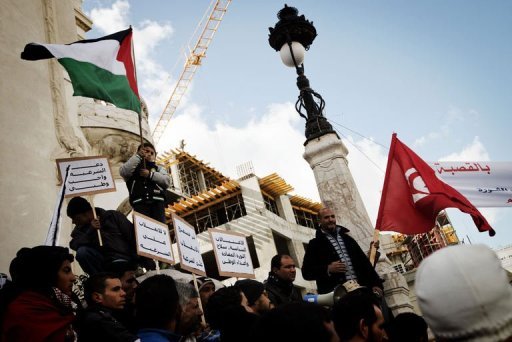 AFP – Thousands of members of Tunisia’s ruling Islamist party Ennahda on Saturday protested in support their movement’s legitimacy and against plans for a government of technocrats aimed at resolving a major crisis.

An estimated 15,000 protesters, many waving party flags and some holding black Salafist banners, thronged Habib Bourguiba Avenue, a Tunis boulevard that was the cradle of the 2011 uprising that ousted president Zine El Abidine Ben Ali.

“God is greatest,” and “Supporting Ennahda is a duty,” were some of the slogans chanted by the protesters, who also waved banners reading: “For the defence of the Arab-Muslim identity,” and “Media of shame and sedition.”

The mass rally, which was expected to last until 1500 GMT, was called to defend the right of Ennahda to continue at the head of the ruling coalition and oppose Prime Minister Hamadi Jebali’s plan to form a government of technocrats.

Jebali, Ennahda’s number two, announced his plan in the wake of public outrage over the murder of leftist leader Chokri Belaid, who was gunned down outside his home on February 6.

His assassination, the first of its kind in Tunisia’s modern history, plunged the country into its worst political crisis since the revolution, after months of failure to overhaul the government, and laid bare divisions within the ruling party.

The prime minister has threatened to resign if he fails to secure the support he needs to form his new government.

After meeting the leaders of the main parties on Friday, Jebali said talks on the new administration had been rescheduled for Monday and that a previous Saturday deadline for its formation had been cancelled, with no new date set.

Ennahda was repressed under Ben Ali’s regime but emerged as a powerful political force after his overthrow in January 2011, with its veteran leader Rached Ghannouchi returning from 20 years in exile to a hero’s welcome.

It won the first post-revolt polls in October 2011, securing the key foreign, interior and justice ministries in the coalition government, and controls the National Constituent Assembly, holding 89 of 271 seats.

But it is divided between moderates, among whom Jebali is the most prominent, and hardliners, represented by Ghannouchi, who are refusing to give up key portfolios, insisting on the party’s electoral legitimacy.

The family of Belaid, who was a scathing critic of the ruling Islamists, has accused Ennahda of orchestrating his killing, a claim the party strongly denies. Any progress has yet to be announced in the murder inquiry.

Tensions between liberals and Islamists have simmered for months over the future direction of the once proudly secular Muslim nation.

For some Belaid supporters, the suspicion of blame for his assassination has fallen on the League for the Protection of the Revolution, a controversial group linked to Ennahda and implicated in attacks on secular opposition groups.

The League, which was expected to join protesters at Saturday’s pro-Islamist rally, said its president, Mohamed Maalej, was resigning in order to form a political party.

As well as the row over the new government, there is deadlock over the drafting of the constitution, with parliament divided over the nature of Tunisia’s future political system.

Tunisia’s stability has been further undermined by a spate of attacks blamed on radical Salafists, and by social unrest, with Tunisians frequently taking to the streets in protest at the government’s failure to improve living conditions.