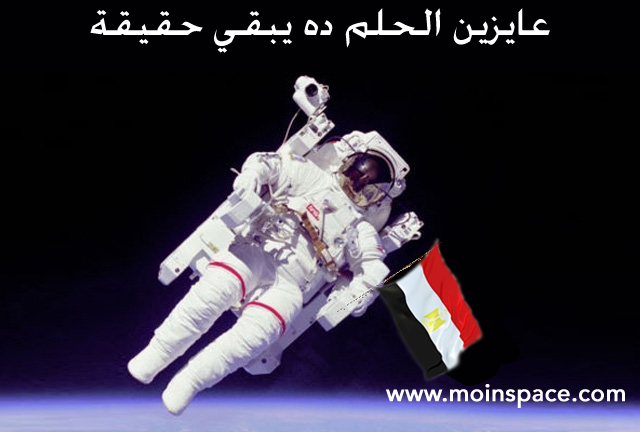 Many kids dream of becoming astronauts when they grow up, but as time passes they follow different paths and satisfy the dream they once had by watching movies and series, like Star Wars and Star Trek, telling tales of civilisations elsewhere in our galaxy, or in a galaxy far, far away. A competition is currently under way that has revived the genuine dream for many, because the prize is a trip into space.

A leading brand of deodorant has started a worldwide competition where anyone who has ever wanted to go into space can enter. The competition takes place over several stages in every country and then move on to the US towards the end of this year, where the top contestants from each country will undergo rigorous mental and physical testing. A qualified team will then select the lucky winners who will travel 103 kilometres into space.

At this moment in time the competition is still in the first stage and one of the Egyptian hopefuls is Mohamed Shehata, who is entering in South Africa, his country of residence.

“I entered because I always dreamed of going into space,” Shehata said. “I know it is a long shot and I thought about it for two days before I entered but I figured it is worth following your dreams.”

The competition started two weeks ago and Shehata joined after it had been up and running for a week. “Once I entered my friends became very supportive; they started a Facebook page and people started voting and I realised this could actually happen,” he said. “I am taking it seriously and have started to get into better shape physically. My mind is already in the right place and with all the support I am getting I already feel like a winner,” Shehata said with a laugh.

Shehata is an engineer who works as a project manager across the African continent and is based in South Africa. “I have lived in several African countries growing up and I gained a lot of respect for the different cultures. I am Egyptian and stand for Egypt, for Africa, for the Middle East and for Arabs,” he said.

When asked if it is more logical that the South Africans would support one of their own more, Shehata said: “I am getting a lot of support from my colleagues and friends here. The other day one of my neighbours commented on the fact I have signed up for the competition and they were very supportive.”

Omar Samra, the first Egyptian to climb Mount Everest, has also entered the competition from the UAE. “We are friends and we support each other. It would be great if we could both make it to the second and third round,” Shehata said. “I am very stubborn and will do my very best to make it through. Egyptians unite behind things like this and it would be wonderful if for maybe one moment we can all feel united again when the first Egyptian will go into space.”

Across the world people can cast their vote on the website until 28 February. The process in South Africa means the top three vote winning contestants will automatically go to the South African Space Camp. They will be joined by the 27 winners of a draw and of competitions held in several universities.

Altogether they will make up the 30 South African competitors.  Out of these only three will be selected to go to the International Space Camp in the US where the winners will be selected. At the time of writing Shehata was number six on the list of South Africa, with nearly 3000 votes.