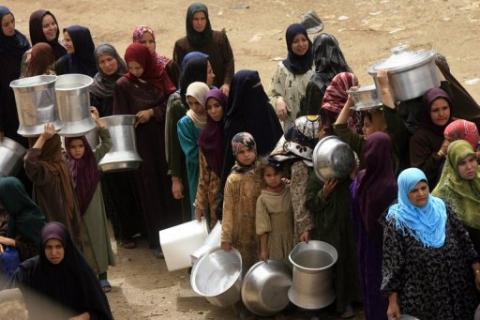 The World Bank is to grant Egypt a $450m loan to fund three drinking water and sanitation projects, which will come into effect within three years.

The first project, worth $300m, aims to improve irrigation networks.

“The third project is worth nearly $30m and aims to improve agricultural sanitation,” said Qotb.

Qotb referred to the importance of the project, adding that each Egyptian has an average share of 660 cubic metres of water for all purposes, with this low number due to a low supply of adequate water resources, thanks to high levels of pollution.

The project includes two aspects: First, to improve efficiency and integration in water resources management in the Mahmoudiya and the Meet Yazid regions, in addition to solving all current pollution problems, said the manager of the project, Mohamed Hamed.

Moreover, the World Bank has also granted Egypt a $6.7m endowment from the Global Environment Facility (GEF) to improve the management of water resources in Egypt, said Deputy Chairman of the Executive Office of World Bank Operations Hossam Abu Dadjaja.

“The water sector in Egypt has seen many recent accomplishments,” he said. “Water utilities coverage in urban areas has now reached 100%, while in rural areas this is now up to 90%.”

However, despite these announcements, water shortages and problems continue to plague the country.

Yesterday, in the city of Al-Arish, residents of Rafah and Shiekh Zweid organised a protest regarding the poor levels of drinking water currently being supplied to their homes. According to Egyptian media, these areas have also suffered water cuts, both for drinking water and their supply of saltwater.

Also yesterday, in Matrouh, the governor tasked officials from the Matrouh Water Company to investigate cases where supplies of drinking water and sewage water have been mixed together.

Egypt has one of the highest levels of renal failure and liver disease globally. In 2009 a report published by the General Assembly to combat kidney failure stated that Egypt has between 300 to 500 cases of kidney failure for every one million people.

In Daqahleya in 2012, people living in the Balts village were suffering high rates of renal failure-related diseases, as they were using unclean water from canals due to a cut in the water supply which had lasted three months.

And since 2012 in Gharbeya, high rates of cancer have been reported due to residents obtaining their water from Asbestos pipes, which are banned internationally, as well as ruined water tanks and canals, according to the Egyptian press.

He added that Egypt is among the top-ranking countries globally for renal failure and hepatitis rates, and that this is directly related to the polluted drinking water.

Toulba also said that Egypt needed “a clear strategy” with specified funds, which may have to go up to the billions in order to solve the current problems, as well as a specific timeline to bring these measures into fruition.

“For my part, I use drinking water purification equipment, because our regular tap water is no longer suitable for drinking,” said Toulba.

One cafeteria worker who wished to remain anonymous said the problem was with the water companies themselves, and that in order to improve the quality of the water, drastic changes are needed throughout the whole sanitation system across the nation.

“I don’t trust the government’s decisions anymore; the water quality is very bad,” Said Ahmed Mahmoud, an architect. He added: “I am expecting a huge water crisis soon.”