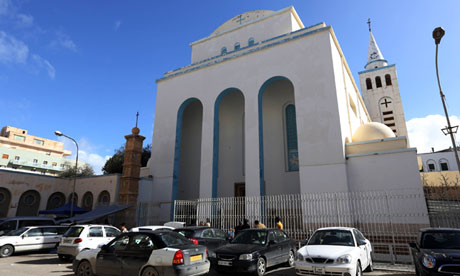 An Egyptian and three other foreigners were arrested in Libya for proselytising. The four were arrested on 12 February, and could face the death penalty under laws enacted by the former leader Muammar Gaddafi.

“Proselytising is forbidden in Libya. We are a 100% Muslim country and this kind of action affects our national security,” security official Hussein Bin Hmeid told Reuters.

The four have not been sentenced yet, as investigators continue to gather evidence. Nevertheless all four have received consular support from their respective countries; Egypt, the United States, South Africa and South Korea.

Local news agencies have reported the four were producing pamphlets that explained Christianity and security officials are said to be focusing on the distribution of these pamphlets.

The arrest is the first of its kind since Libya’s revolution toppled Gaddafi. Officially there are no ethnic Libyan Christians in the country. A large majority of the Christian population is Egyptian and according to the national census all other faiths present in Libya are worshipped only by the expatriate community.

Attacks on religious minorities have taken place in Libya, most commonly directed at Sufi Muslims, who have had their places of worship demolished. Since Gaddafi’s death, such attacks have become more common.

The Egyptian embassy in Libya said they are not authorised to comment on the issue, directing queries instead to the Ministry of Foreign Affairs. The ministry however could not be reached.