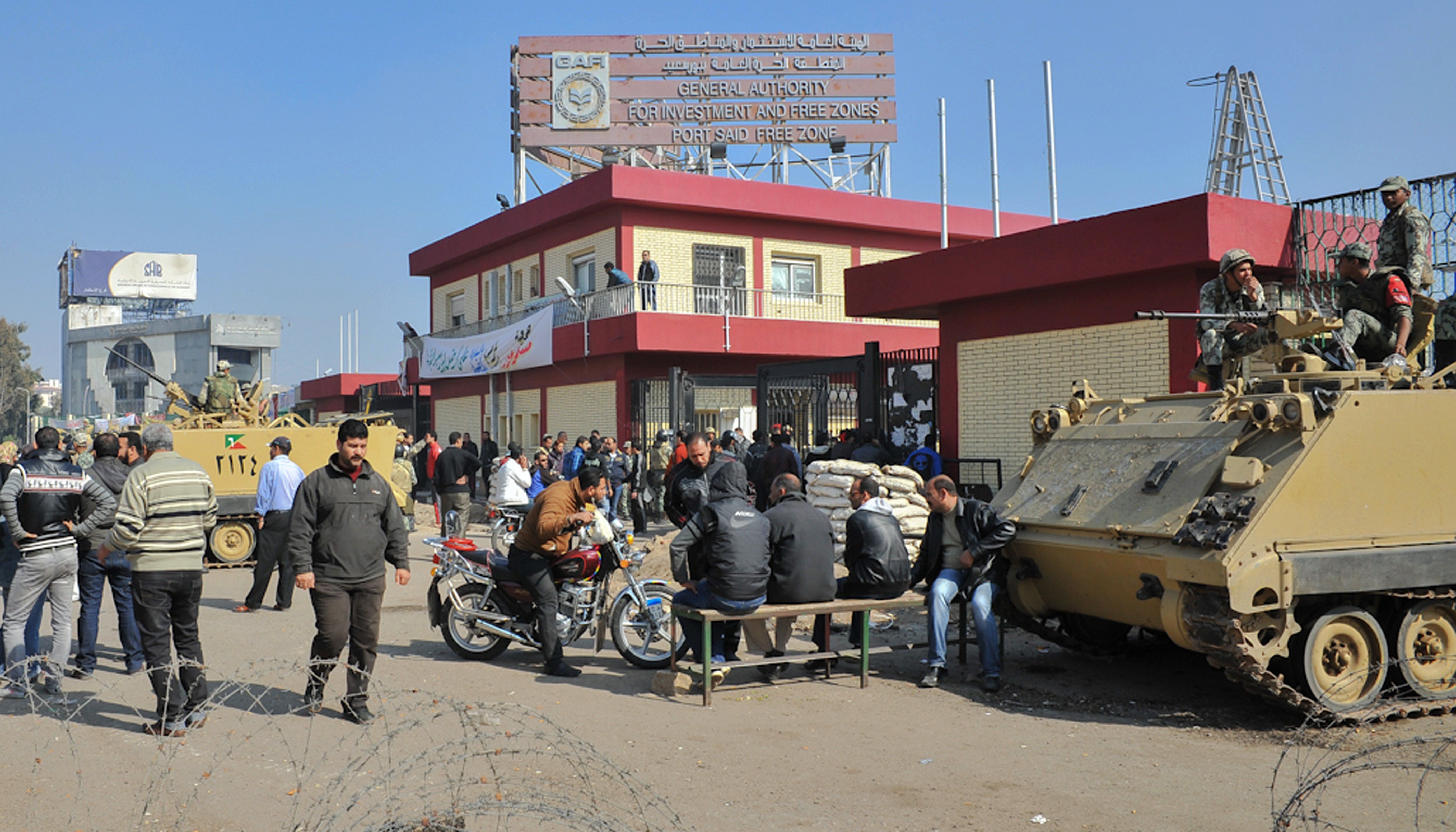 Residents of Port Said continued on Monday their civil disobedience for the second day, while military tanks surround key facilities in the governorate.

The protesters began their marches early Monday morning; relatives of those killed in the violent clashes that erupted on 26 January participated in the disobedience, carrying pictures of the dead.

Protesters blocked the entrances of the city preventing migrant workers, the majority workforce in Port Said, from entering the city.

Workers join protesters after closing the gates to the shipyard and hanging a sign against the “murderous regime”.

“The military ruler in Port Said Major General Adel El-Ghadban tried to negotiate with workers to end the disobedience but they refused,” said Mahmoud Qandil, an accountant and one of the protesters.

The march entered the Investment Authority and called on workers to join the disobedience, factories were closed down and workers either joined the marches or went home.

“One of the factory owners fired shots in the air to disperse protesters who responded by pelting the factory with rocks causing minor damages,” Qandil added.

Protesters chanted “as long as Egyptian blood is cheap, down with any president”. They also chanted against the Muslim Brotherhood and the interior ministry.

The decision came as a response to the demands of protesters in Port Said who continued their campaign of civil disobedience which began on Sunday.

“The governor is collecting money for the families of those who died in the clashes; until now EGP 35,000 has been allocated to each family,” said Ayman Serry, manager of the Port Said governor’s office.

The governorate of Port Said, the Ministry of Insurances and Social Affairs and Port Said Investors’ Association are among those who contributed to the fund.

Abdallah stated that Mekki ordered the judge to start investigations immediately and to summon all security officials in the governorate, reported state-owned Al-Ahram.

Representative of Port Said in the Shura Council Hussein Zayed performed a sit-in at the council on Monday in protest against inaction by the presidency to help solve Port Said’s problems.

Zayed, who is also the assistant secretary general of the Al-Wasat party, stated that he had presented suggestions to President Mohamed Morsi, Prime Minister Hesham Qandil and the Port Said governor to solve the city’s problems, but they were all ignored.

Zayed ended his sit-in the same day after he met with Speaker of the Shura Council Ahmed Fahmy who promised to look into the suggestions and respond as soon as possible.

“I don’t think the people will accept Mekki’s decision or end the disobedience. On the contrary I think the demands will increase” said Mustafa Al-Bayaa, 6 April Youth Movement member in Port Said.

Mohamed Wefki, a member of the Revolutionary Socialists in Port Said, agreed with Al-Bayaa: “The regime has promised several investigations since the 2011 Revolution and either the investigations were not conducted or the results was disappointing.”

Wefki added that a group of former members of the parliament dissolved in 2012 and members of the Shura Council representing Port Said announced they will meet with Morsi.

“This group doesn’t represent the people of Port Said; it includes representatives from the Freedom and Justice, Al-Wafd and Al-Wasat parties,” Wefki said. “It’s like the regime is negotiating with itself.”

Marches had swept Port Said early on Sunday, responding to calls for a civil disobedience in the governorate.

Ultras Green Eagles, fans of Al-Masry football club in Port Said, called for civil disobedience along with other groups over the “injustices” endured by residents in the governorate.

“The protests marked the closest that the chaos in Egypt over the last two years has come to threatening the operations of the Suez Canal, an artery of shipping critical to both international commerce and the battered Egyptian economy,” the New York Times reported on Sunday.

Chairman of the Suez Canal Authority Mohab Mamish released a statement stressing that Suez Canal operations were not affected by the events.

The protesters called for justice for protesters killed during clashes on 26 January.

More than 30 people died in the clashes after Port Said Criminal Court sentenced 21 people to death for killing 74 football fans in February 2012; the remaining defendants will be tried on 9 March.

Other governorates including Alexandria, Ismailia and Cairo are planning marches in solidarity with Port Said’s civil disobedience.