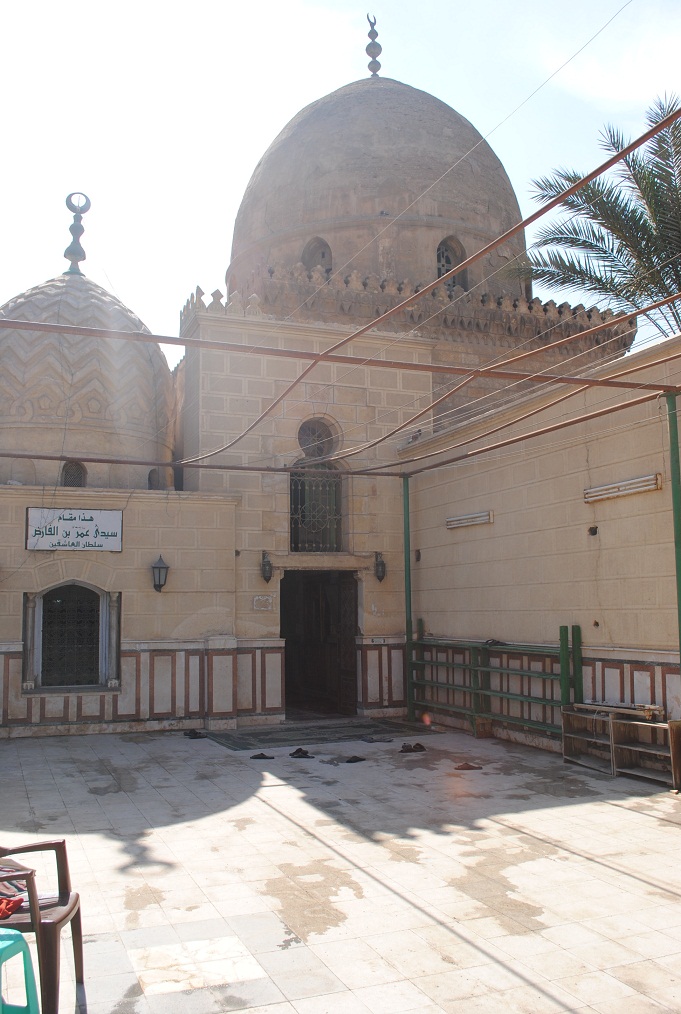 The city of the dead, or Qarafa, located in the heart of Cairo, is, unlike most Cairo’s neighbourhoods, clean and tranquil. It is the burial place of many historic Egyptian figures, including the great poet Omar Ibn El-Farid.

Ibn El-Farid, son of El-Farid in Arabic, or Sidi Omar as known locally, is one of the greatest Egyptian mystic poets. To this day his poems still read beautifully, including his masterpiece The Sufi Way, which is also the longest mystic poem ever written.

Born in March 1182, Ibn El-Farid was brought up to follow in his father’s footsteps and become a legal advocate. El-Farid in Arabic means he who advocates women’s rights in Shari’a or Islamic legislation.

However, Ibn El-Farid abandoned his studies and instead chose a solitary religious life. He frequently retreated to the foot of Moqattam hill for periods of spiritual reflection, and a mosque and shrine were built there to honour the significant reverence Egyptians in general and Sufis in particular have for him.

Ibn El-Farid left Egypt for Mecca where he studied Islam and Sufism with the prominent Iraqi mystic sheikh Ibn-Al Suhrawardi for 15 years and it was there that he composed most of his poetry. In Mecca he continued his religious solitary life and meditated on the meaning of life, the relationship between man and God and the nature of Sufism. He communicated his thoughts and reasoning through poetry.

Many historians mention in chronicles and biographies that Ibn El-Farid was able to compose more than 45 verses at once and that he was able to enter long states of ecstasy that could continue for 10 or more days. During these states he would not eat, drink or sleep, insisting that he was being nourished spiritually.

In Sufi history many stories about Ibn El-Farid and his miracles, known as karamat, are preserved and still find an audience eager to believe in his spirituality. One of the legends says that Ibn El-Farid was protected during his spiritual retreats by two lions send to him by God, while other tales mention special mystical and metaphysical abilities.

The mosque in Al-Moqattam was built in the 18th century by the Ottoman prince Ali Kared, who built another tomb for himself beside the mosque. In 1928, Princess Jamila Fahmy, King Fouad’s aunt, dreamed of Ibn El-Farid, quietly asking her to care for his mosque and shrine. The princess responded to his call and restored and renovated the mosque. He also built a huge, adorned dome beside it which still carries her name, Jamila’s Dome.

The mosque itself cannot be compared to the magnificent designs of Al-Hussein or Al-Azhar, but its location at the foot of Al-Moqattam and its simple structure lend it an atmosphere of peace and tranquillity.

The guard of the shrine said many foreigners also come to visit Ibn El-Farid shrine, especially during the summer and when his birthday is celebrated in March. Another Sufi singer, Yassin Al-Tohamy, is known for holding a celebration concert at the shrine every year on Ibn El-Farid’s birthday, when he recites Sidi Omar’s poems.

On these occasions Al-Tohamy’s mellow voice echoes over the city of the dead as he recites the timeless poems of Ibn El-Farid, and the sense of deep spirituality is shared among all those who have come to remember one of the greatest Sufi poets.