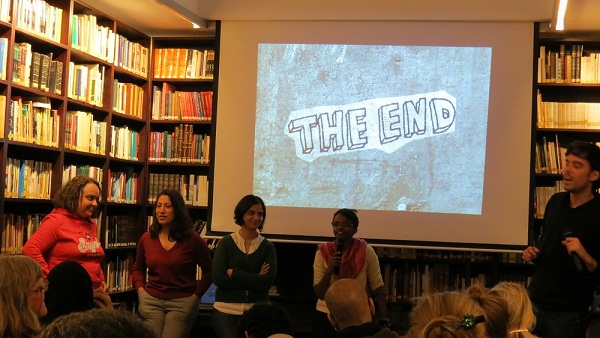 Last Sunday the Netherlands-Flemish Institute in Cairo screened seven short films made by up-and-coming female directors. The collection of films included a range of genres; from personal chronicles to fictional stories and novelistic documentaries.

One of the films that really stood out was Nadine Salib’s entry Dawn, which is a collection of thoughts and images featuring Salib as she tries to define herself in the world around her.

She made the movie two years after her mother’s death in 2011, in the midst of the Egyptian revolution. Salib focused on her own thoughts and emotions and in only seven minutes captured how the world defines her, how she defines herself and how she perceives issues such as love, Egypt and the family.

In the film she flowed naturally from subject to subject, saying things like, “my mother told me the best thing in the world is to love and be loved”. At times she is painfully honest about herself and the world: “I eat when I am depressed, I write a lot to forget.”

Salib made the film as the product of a self-portrait video workshop at the Townhouse Gallery. Although Salib only started making films recently, she is definitely a director to watch.

Another mesmerising film was Aida Kashef’s A Tin Tale, which depicts the heart-wrenching story of a prostitute called Mona Farkha, played by Maryam Saleh. The short film is not a documentary but it is based on true events. The film mixes between telling the story of Farkha and chronicling the reactions of Aida, played by Amina, as she listens to Farkha’s story.

The film exposes the cruelty of society by showing how it deals with Farkha from the moment she is gang-raped at the age of 13. It also subtly hints at how relatable Farkha’s story can be. At times Amina is the one wearing Farkha’s scarf, especially during the parts relating her strength as an individual. The tale ends on a sad note, as expected, but the film handles the story deftly and artistically.

Then there was the fictional film, Spring of 89, by Ayten Amin, which records the friendship of Sarah and Camellia. The film, as apparent from the title, is set from 1988 to 1989. Amin’s attention to detail in the movie is great; costumes, sets, décor and the music all reflect the tastes of the period. The plot is a quirky one that reveals itself only gradually during the film.

One of the interesting documentary entries was Nada Zaitona’s Ghareeb, which chronicles the life of an ex-police informer turned actor. Nada follows her subject, Ghareeb, in his daily life both around his neighbourhood and when he goes to an audition. The film highlights an aspect of Egyptian life that is completely unknown.

Other films included Mona Lotfi’s A Walk in the Grey Sun, about the brief walk of a guidance counsellor who seems to be living in the past. The very personal film of Noha El Meadawy, At Night, is a collection of images rather than a talking movie. The last movie of the night was Graffiti Artist Aya Tarek’s How to Fuck Up Your Mind, which is a sequence of drawings concerned with the effects of fame.