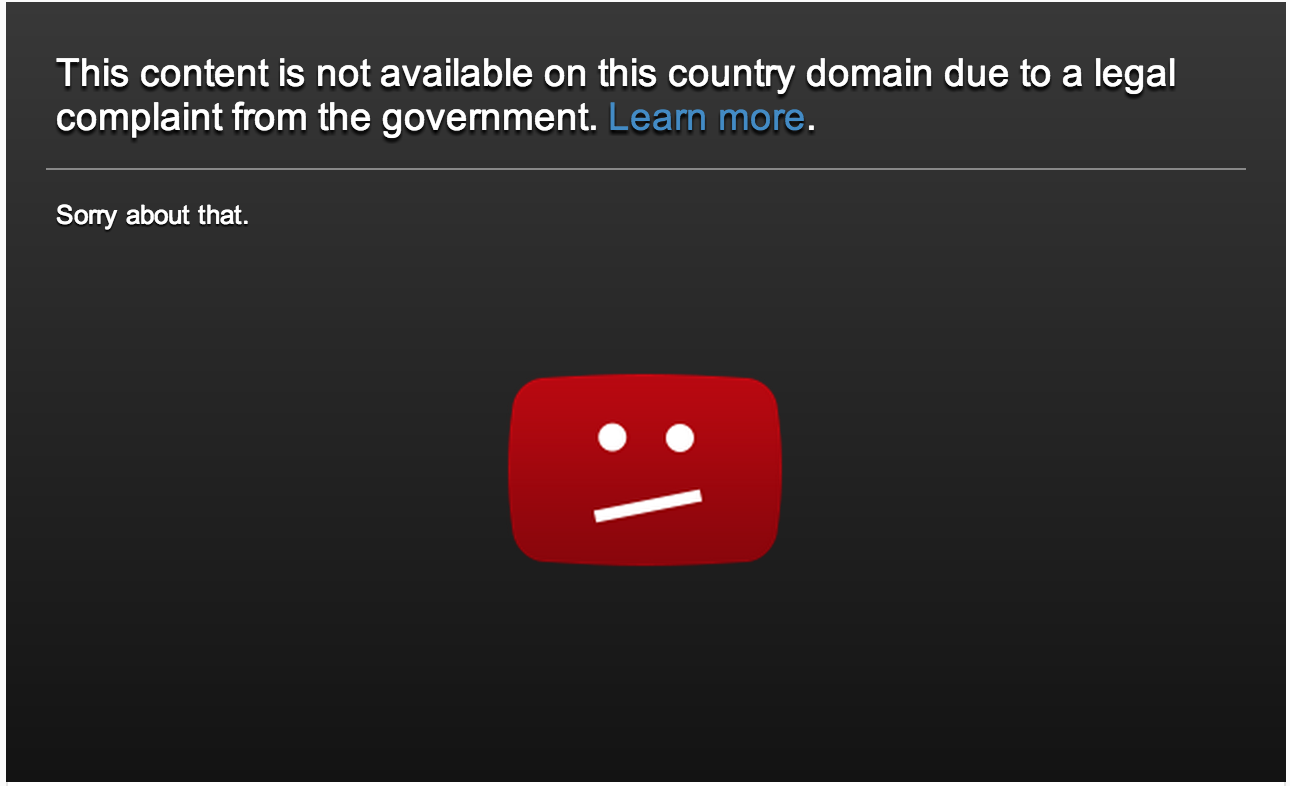 The Egyptian government have provided Google with links to YouTube videos that it believes are contrary to the law and Google confirmed that it has blocked access to them in Egypt.

In a statement released by an official Google spokesperson on Monday, the Internet giant confirmed that it has blocked access to “individual videos that [the Egyptian authorities] believe are illegal”.

The Egyptian government submitted the links to the videos and they were blocked “after a thorough review”. The videos have been blocked only on the Egyptian version of YouTube and are still available in other countries.

The spokesperson asserted that Google “works hard to create a community everyone can enjoy and which also enables people to express different opinions”.

The spokesperson explained that this is problematic “because what’s OK in one country may be offensive or illegal elsewhere”.

Sherif Hashem, Vice President of the National Telecommunication Regulatory Authority (NTRA) confirmed that links to videos have been sent to Google for review. He asserted that the links are specific to the controversial Innocence of Muslims video as this was the focus of the Administrative Court ruling of 9 February, which banned YouTube for 30 days.

Daily News Egypt checked the blocking of the video and discovered that it is still possible to view the Innocence of Muslims video on YouTube in Egypt.

Some versions of the video are blocked and display the message: “This content is not available in this country domain due to a legal complaint from the government.”

Searching YouTube for the video in Arabic found a blocked video, but a search in English found a number of links that are working.

Hashem said “no one entity is able to collect all of the links so we have opened it up to the community to forward links to the video.” Hashem is referring to ‘hemeyat Misr’, a new website set up by the NTRA which invites the public to inform the authority of links which they find offensive.

Hashem added, “we respect the culture and religious beliefs of Egyptian society. YouTube is a very important channel for information and business and there are a lot of benefits.”

Nada Kabbary, spokesperson for the Association for Freedom of Thought and Expression (AFTE) said on Tuesday that the decision to block videos is an attempt at a compromise. She added that this is not the end of the problem saying that “the government should implement the court order and there is no place for a compromise, out of respect for judicial orders”.

Kabbary stated that “blocking videos on YouTube is a great violation against freedom on expression and information”.

AFTE submitted an appeal on 16 February calling for the court’s decision to be overturned. On 14 February the NTRA also appealed to the court to reverse its decision because of “the impossibility of literally executing it”.

Kabbary reported that as yet the AFTE have not had any indication as to whether its appeal has been accepted or not. She added that the appeal is important because if it is accepted it will delay the block on YouTube until the appeal process is completed.