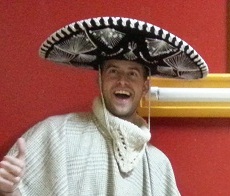 Gringo’s Burrito Grill has been open for about a year now and many Cairenes have happily eaten their Mexican food. The men behind Gringo’s are launching an interesting game this week: Spot the Gringo.

A gringo wearing an authentic sombrero and a poncho will be roaming the streets, and whoever manages to find him wins a free burrito with any order made.

It all started as a promotional campaign when Ahmad Nada, one of the owners, wore the Mexican outfit and went out on the streets of Maadi to hand out their restaurant’s menu.

“We wanted to promote the restaurant but in a creative way,” said Ahmad. When he left his house wearing the costume, he “almost caused two accidents,” said Ahmad. Anyone walking down the streets of Cairo wearing a Mexican costume would draw attention and people could see that he was handing something out to passersby.

The promotion campaign received great feedback; whether pedestrians or drivers, people were curious and wanted to know what was going on and expressed appreciation for the creative idea.

While some people thought Ahmad was an actual Mexican, others played along. “Some people said ‘Oh, welcome to Egypt’ and some said ‘Gracias señor’,” said Ahmad.

Ahmad and Dave Franzel, the owners of Gringo’s were not sure if the idea of building the idea into a game would actually work. “I thought it was going to be too hard to promote,” said Dave. But one day, when a foreign girl walking in front of him asked if it was possible to take a picture with him all dressed up, they knew it was going to work. The gringo even attracted those sitting inside cafés in Maadi, Ahmad said there was a man who got up from his table and went outside just to take a picture together.

After all the positive feedback Ahmad and Dave developed the competition called Spot the Gringo. Through their Facebook page Gringo’s will announce the exact time during which the mysterious Mexican will be wandering the streets.

The restaurant will also post puzzles and clues that will help the customers to figure out where the gringo might be. To win you should, when spotting him, should take a picture with the gringo and send it to the restaurant’s email.

Gringo’s will post the pictures on their Facebook page and the winners receive a free burrito with their next order. The competition is planned to last for about four weeks, challenging the sharp eyed people of Maadi to watch out for the sombrero.